Getting rid of weeds 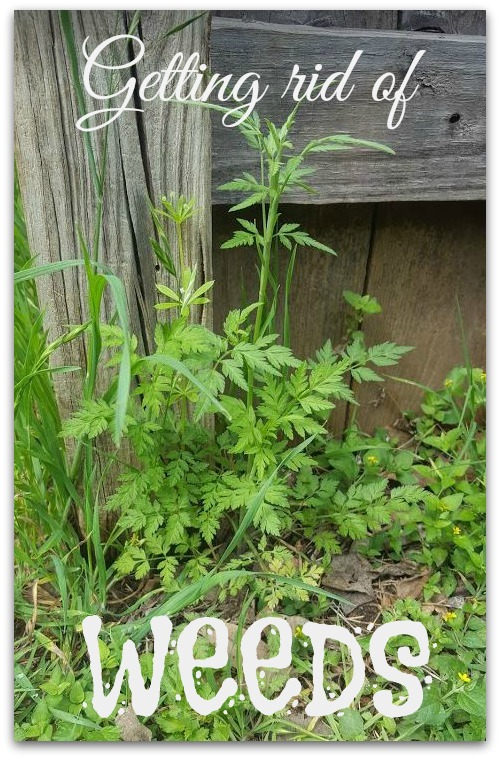 So, it’s pretty much Spring here in Texas (we rarely have much of a “winter”) and so the trees are starting to bud, the flowers are beginning to bloom… and the WEEDS are painstakingly flourishing!

My toddler loves being outside (a boy after his momma’s heart) and so nearly every day, rain or shine, we go outside to play!  One afternoon we were out there and I noticed this big patch of weeds in our flower bed.  Now, normally, I wouldn’t be so bothered by them, but we had these same weeds last year and they were obnoxious!  They were sticky, interconnected and spread… well, like weeds.

Now, I could have just gone for some quick-fix chemical solution, however, my young son and my kitty cat are outside in the yard all the time, which meant, for me, chemicals were NOT an option (Not to mention all the adverse side effects and health problems they can cause).  So for as long as Jedidiah would allow me, I’d sit and pull them up.  By hand.  I worked for a good hour that first day, my son brought me my water bottle and my phone and I only had to stop a few times when he needed help with something.  Anyways, after that first day, I began noticing these weeds EVERYWHERE!  They were all over the yard, in our garden plots, even in our car port.  So, for the rest of that week and these past few weeks, I have been pulling up weeds nearly every day!

I let my mind just wander as I pulled them up.  It was almost… lest I say… relaxing (In the same sense that running can be relaxing).  You can just let your mind be blank, you don’t have to focus on anything major, you can just allow yourself to be lost in your own thoughts.  You can simply quiet your spirit and pray… or in this case, listen.  And here is what I have realized.

You see, I didn’t notice the weeds right away.  It took a while, until they were actually quite overgrown, in order for me to take notice.  Sin is very much the same way.  Little sins creep into our lives quite easily and often go unnoticed or undetected until all of a sudden, our “little” sins have grown quite substantially and gotten out of control.

Throughout those days I would spend my afternoons carefully going from section to section in my yard, tackling small chunks at a time.  I tried to be super thorough, getting up as much as I could.  And as soon as I would feel confident with one section, I would move on to the next… except that only a few days later, I would return to those sections that I already weeded and, much to my dismay, they would have those same dang sticky weeds back!  Frustrated, I would stoop down to pull them up.  But, even this, I realized, is very much how sin works in our lives.  We think we’ve eradicated it (in an area or two), and then we try to tackle a different sin… but sometimes it just keeps popping right back up.

Another thing I’ve learned about weeds is that if you don’t pull them up by the root, they will come right back… just like sin.  Sometimes we think we are “handling” our sin, but if our Gardener, by his Holy Spirit, isn’t the one pulling it up by the ROOTS, it isn’t going to disappear from our lives.

I noticed many different kinds of weeds in our yard over the course of these few weeks- sticky weeds, prickly weeds, pretty weeds and tough weeds.  Each of these can also serve as an illustration of sin.

Some weeds, like sin, are “sticky” and interconnected (just like those blasted weeds that were EVERYWHERE), often leading or spring-boarding into other sins.  Often times we get into them without even intending to or sometimes without even realizing it!  Pride can be like this, self-sufficiency, good works (with selfish intentions), lies, etc.  Sometimes they can even take the form of “good” things that we get into but that slowly take priority in our lives and “spread” in influence, taking the place of our relationship with our creator.

Some sins, like the prickly weeds, are obvious and we know that we should stay away from them because they can obviously hurt us or others.  These could be things like addiction, pornography, infidelity, murder, stealing, etc. 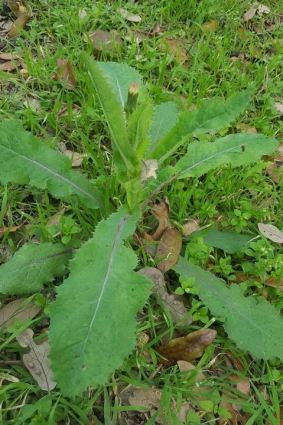 Others, like the pretty flowering weeds, look appealing and attractive, but still take over our lives and bring death in the end.  Money, power, sex, lust, partying, etc. would be examples of these.

Some are shallow and easy to pull up- they are obvious and easy to reach… and then there are the tough weeds have the deepest roots and these are the HARDEST ones to pull up!  I actually have callouses on my finger from pulling up so many of them!  These are those deeply-rooted sins in our lives, sometimes going back even to our childhood.  These are the sins that may have developed into strongholds in our lives.  These are the ones that the gardener has to take special caution with and that are much harder to deal with.  They can also be painful to pull up (Yes, I was pulling all these weeds without gloves on… ouch.  Lesson learned.)

But the best thing that he showed me is this.  After I would pull the weeds up, I’d put them in piles all over our yard- on the sidewalk, on our stepping stones, on the lawn chairs, on our yard swing… anywhere but on the ground where I feared they would take root once again!  After just a day in the sun, they were dried up and posed no greater threat.  They were DEAD.  In the same way, in the light of God’s son, Yahushua HaMashiach (Jesus), sin CANNOT live.  Righteousness has already been imparted to us through HIS finished work on the cross.  And being in his very presence causes sin to die in our lives as we continue to die to ourselves and live in obedience to him.  Being in the Son’s presence makes everything else just simply fade away.  Nothing but his love remains.  Hallelujah!  Now THAT is some good news!

I’m so thankful that we have a Gardener who is much more patient than I am.  A Gardener who wants the best for his children, a Gardener who takes time to gently prune and tenderly uproot the undesirable things in our lives.  One who wants us to flourish and grow in faith and be BEAUTIFUL from the inside out, always pointing to His glory!  YHWH slowly sanctifies us, weeding out the bad, and allows us to produce the fruits of the Spirit so that when others look at us, they see the glory of HIM!

What needs to be uprooted in YOUR life?

Posted by logsdonsbigadventures on March 9, 2017 in Uncategorized