Our last day of the Gibbon Experience

Trent and I intentionally woke up very early to the sound of the alarm buzzing next to our ears.  Careful not to make too much noise, we shifted ourselves into a position where we could see out into the trees around us, hoping to catch a glance of the black-crested gibbons the Experience is famous for.  The morning was freezing cold, and we hardly wanted to lift up the mosquito nets to look out, but, wrapped up in our blanket and every layer of clothing we owned, we sat in the fog-laden, quiet solitude of the morning and watched and listened intently.  We spent about half an hour as such, hardly moving a muscle, listening to different birds sing their morning songs and hearing the cacophony of the nearby bullfrogs.  As much as we had hoped to see the gibbons (and we’d been told that early morning was the best time to both see and hear them), we were not so lucky.  Although we were disappointed, I cannot say that it detracted from our overall enjoyment of the experience in the least.

Once we heard the others stirring and moving about, we decided to get out from under the covers and brave the cold.  We gathered around our short table and watched as Pia zipped in with a hot kettle for our morning coffee.  Ashley lined up the coffee cups and began filling them with condensed milk as our group talked about cool documentaries to watch and travel plans once the Gibbon Experience was over.  We would be going on to Luang Prabang, as were Ashley and Elle, and the others would be going their separate ways.

After breakfast, we harnessed up and headed out for our last day of zip lining and hiking through the beautiful forest of Laos.  On this last morning we got to do the longest line once more, treasuring every moment high above the trees.  We zipped but a few times before we gave up our harnesses and began the long hike back to the village where we would be transported back to the Gibbon office in Huay Xia.  This particular hike took us across the river FOUR times.  By then, my feet were tender anyways, and crossing the river several more times on the harsh rocks and uneven ground was not my favorite idea.  Nevertheless, we braved our way across the cold waters and headed up the banks to continue our journey back.  When we finally got out of the mountains and into the plains, we found that the ground was very muddy and that there were several places that were nearly impassable without getting our feet wet (literally).  A few of us tried, unsuccessfully, to do so, but by the end, we were all laughing, soaking wet, and covered in mud.  We were really quite the sight!  Finally, we all decided just to take off our already sopping wet shoes and continue on barefoot or in flip-flops.  I don’t know why we didn’t just do that to begin with! 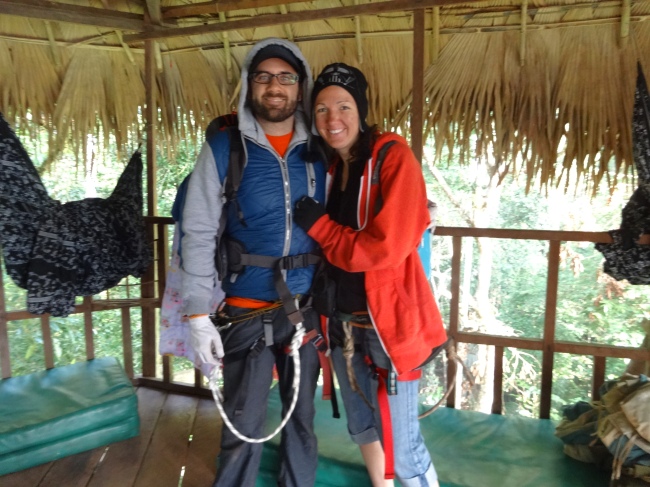 Along the path there were beautiful flowers and plants I had never seen before, along with a cattail-like plant that I had seen in Mexico that was actually pretty soft to the touch.  We could tell we were getting closer to the village when we saw random herds of cows and water buffaloes, pigs with their piglets, and wild chickens and turkeys dotting the landscape.  We also passed by several rice paddies with people working hard harvesting their crop.  We waved our hellos and were particularly smitten with the adorable kids “helping” out.

Finally we approached the village.  Little kids ran around.  A group of boys armed with slingshots darted in front of us and surrounded a nearby tree.  I’m not sure exactly what they were shooting at, but they sure were fun to watch.  Pia introduced us to his family and we all thanked him profusely for his kindness and generosity in being our group’s leader.  We waited for the other group to return from their treehouse and then we all set back out in the trucks.  Luckily, Trent and I got the front seats again and we enjoyed the scenic trip back.  We stopped for lunch along the way at a little restaurant along the river.  Here they served us rice with a delicious combination of vegetables.   By the time we arrived back, mid-afternoon, we were all exhausted and pretty filthy.  Between the cold and all the activity, Trent and I (and most of the others) never officially bathed while we were on the trip (although we do count our short dip in the frigid river as something), but it kind of added to the whole “one-with-nature” experience.  As soon as we got back, we used the bathroom to wipe ourselves down as best we could before running to the bus station to see if we could get tickets to Luang Prabang for that evening.  We did, and thus began a whole new adventure… (to be continued).

(One of many rivers we crossed)

(Some of the sweet little girls helping with the rice harvest)

(The boys with their slingshots)

(Pia and his son)

Posted by logsdonsbigadventures on February 9, 2014 in Uncategorized