This post is a throw-back to last September, between Trent’s and my birthdays.

Several of our friends at QISS (Qingdao No. 1 International School of Shandong) had mentioned some hot springs not too far north of Qingdao in Jimo.  So for our birthday celebration (our birthdays are 10 days apart), we decided to go up and enjoy the hot springs for part of the weekend.  We asked our classroom assistants for help getting tickets and booking a hotel for the night (the websites needed to book said tickets are all in Chinese…).

Our plan was to go up after school on Friday and come back sometime Saturday- late afternoon or evening.  The hot springs are attached to a beautiful hotel where we intended to stay… until we saw the prices!  Yikes!  Grand Metropark Hotel was well over 100 dollars just for the one night, and that didn’t include our admission to the actual hot springs.  Luckily our old principal, Alejandra, who had been there several times before, came to the rescue.  We gave her a call and she put us in touch with a “friend” of hers that she met the last time she was in Jimo.  He told us that he would help us to find a hotel for the night and that he would pick us up and make sure that we got to the hot springs.  It turned out that the availability in the big hotel was very minimal and extremely expensive, so he ended up making arrangements for us to stay at another hotel only a mile down the road, which also had some “hot springs” inside.  He also offered to pick us up from the bus stop when we arrived in Jimo.

So, with an overnight bag packed, we headed to the bus stop about a mile up the road from our school.  We walked there, and caught bus 617 just outside of Ocean University (also knows as Haida).  By the time we actually got on the bus, it was already getting dark.  Honestly we were a little nervous about knowing where to get off the bus and about getting where we actually wanted to go this weekend.  Things are always a bit of a toss-up when you don’t speak the language well and you don’t really know where you’re going.  About 40 minutes later on a very crowded city bus, we arrived at the correct stop (we thought).  Luckily it was- we’d been talking to our friend several times throughout the journey trying to coordinate everything.  He helped us to get off in the right place.  He greeted us as we disembarked and told us about this other hotel.  He wanted to show it to us before he booked it, to make sure that it was up to par.  So we climbed in his car and chatted with him a bit while we drove the 5 minutes to the hotel.  Now, for the life of me I can’t figure out which hotel it was (sorry), even with all the help of the internet and Google maps… I have no idea what the place we stayed at was called.  When we arrived, we were given a quick tour of the rooms available and we decided that at only about 250 Yuan, this was a much better and more affordable deal.  He also got us into the hot springs that they have inside the hotel for a discounted rate, and he got us into their dinner buffet, which was already closing up.  We paid for the night and said goodbye to our friend for the evening before practically running to the buffet (not because we were excited about the food that they had there, so much as excited about food in general.  It was already close to 8:30pm and we were starving!!!).  We didn’t even drop our stuff in the room!  As we got a few plates full of semi-warm food, the atmosphere was boisterous with lots of very drunk businessmen (this is very common in China).  We ate while watching the spectacles they were making of themselves, all the while gambei-ing (gambei means “bottoms up” in Chinese… so essentially taking shots… of beer) each other in toast after Chinese toast.  We finished up our food as the help was cleaning up and watched a man run down the hallway to projectile vomit in the men’s room (gross…).

Then we headed to our room to drop off our bag and to check out the hotel’s hot springs. After changing into our bathing suits, we headed downstairs and paid for our entrance.  They gave us each a wristband that gave us access to a locker and then Trent and I met on the other side of the locker rooms.  I have to say, I was impressed with how nice they were, and clean too!  On the other side of the doors, we found several different pools, each with different temperature readings.  It wasn’t a huge area, but it had several options, and after the long day (and week) we’d had, we just wanted to soak and relax!  It was kind of awkward though, because even though we were the only people in there, the guard/worker on duty stared at us shamelessly the whole time (which, quite honestly, we should be used to by now).  We didn’t stay very long- maybe 40 minutes.  We took some photos of the inside. 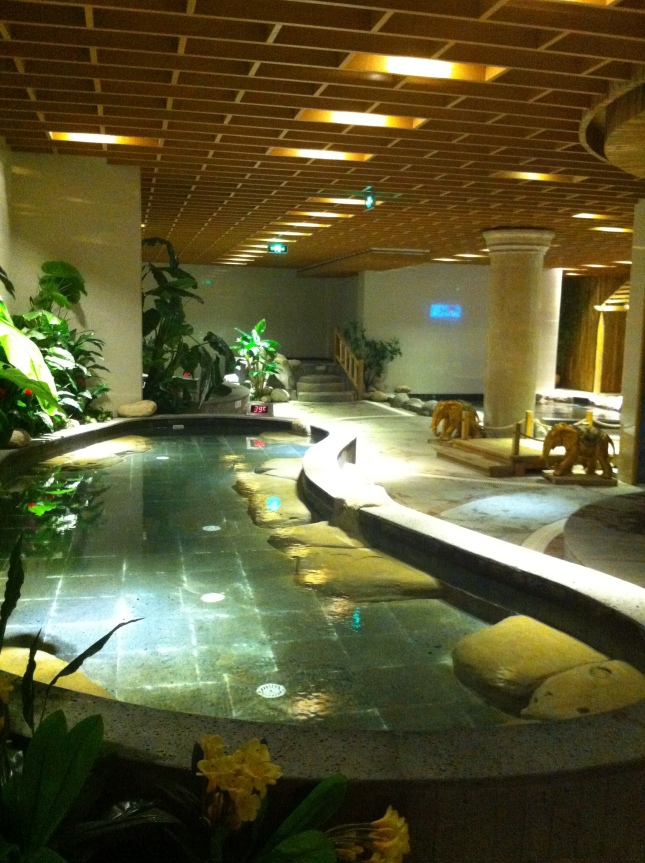 After heading back to the room, we were exhausted! We both took quick showers and then headed to bed! Our friend would be picking us up at 8:30 the next morning!

The hotel, which I think was actually more of a business training center, was comfortable enough. The bed was still very Chinese… meaning extremely hard. But we slept well (that happens when you’ve had a full week of teaching 3-6 year olds). When we woke up, we got our first glimpse of really where we were. It was light outside and it was very beautiful. We enjoyed the view from our window until the grumble in our stomachs told us we’d better get a move on! 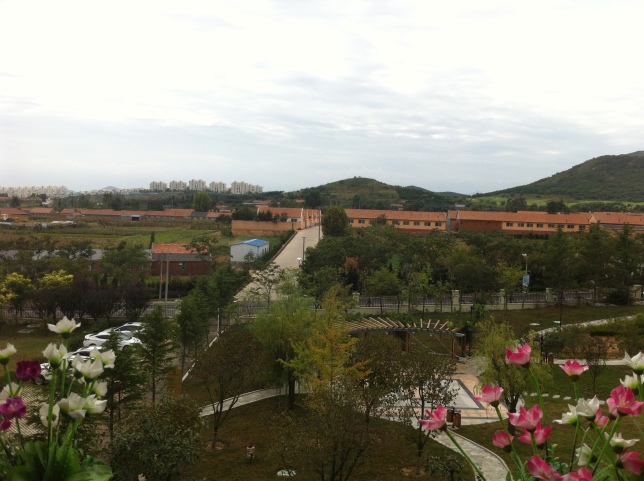 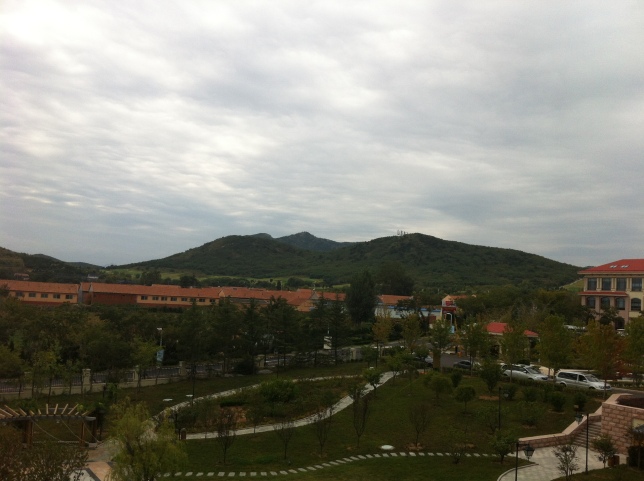 We headed back downstairs for breakfast. Again, it was very Chinese, but at least they had some hard boiled eggs, fruit and bread. Somehow, fried sprouts and other hot foods are not what my body wants to eat for breakfast.

Then we headed outside to meet our ride. Somehow overnight he had changed cars and came rolling up in this Pepto-Bismol pink car, with a big ol’ smile on his face. Trent has picked up on the Chinese way and is now unashamed to take photographs of the things we would consider ridiculous, this being among them. For your viewing pleasure…

He drove us to Ocean Springs Resort, which makes it sound like the springs are from the ocean… they’re not. We didn’t learn until later that these “springs” are just man-made ones (despite being RIGHT NEXT TO the ocean…). The place is beautiful, as is the hotel that we initially wanted to stay at. Here are some photos. 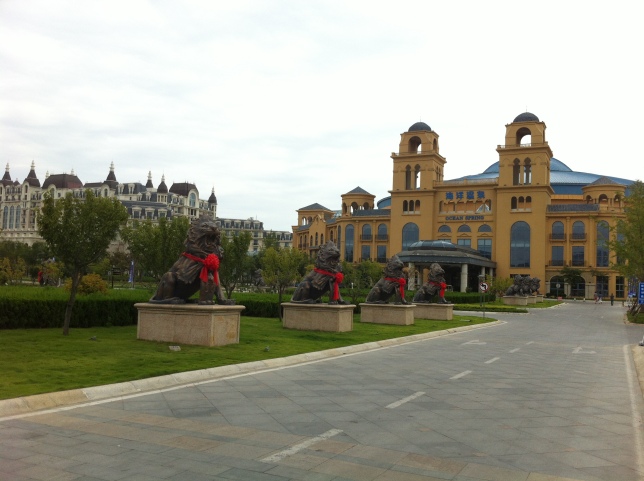 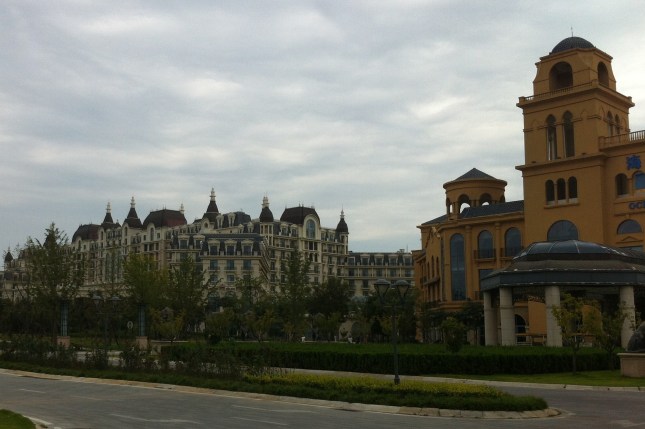 The inside of the Ocean Spring Resort was beautiful and very fancy (we would expect nothing less). 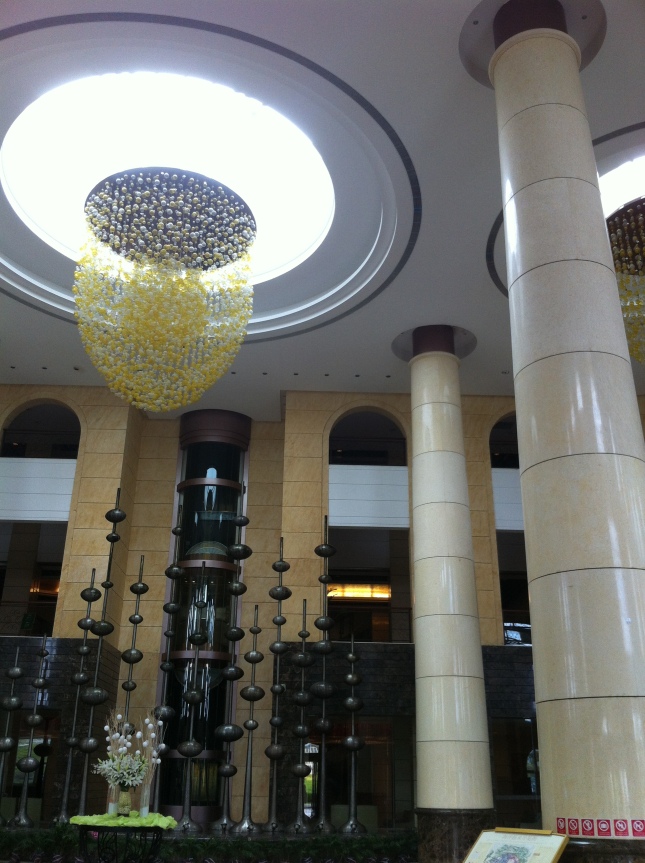 Then we made our way to the counter and showed them our tickets (which our assistants had been kind enough to help us order and print out). They gave us each a wristband that opens a locker containing flip flops, a robe, and a towel. Tickets were about 200 Yuan a person (about 40 bucks). We changed (in front of a million watching eyes) in our respective locker rooms and then headed to the springs. When we entered, Trent started snapping pictures, but about 2-3 shots in, he was told by one of the staff members that photography inside the hot springs was not allowed. Boo on you. Here are the few shots that we got. 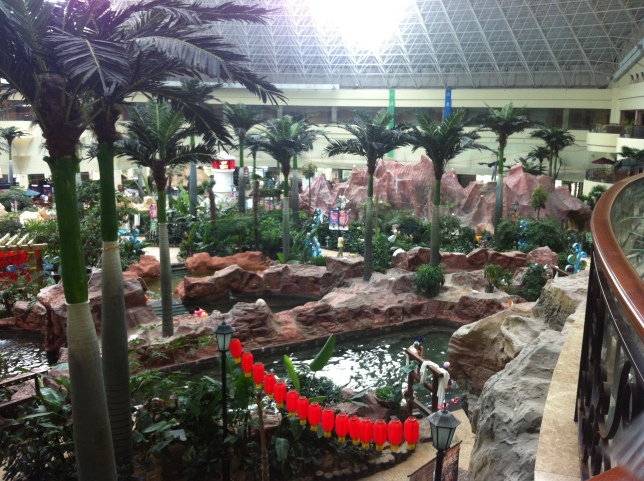 The inside was HUGE. It was all in this massive dome-like structure with lots of natural lighting. There were tons of little pools, each labeled with their temperature. They had different themes, there were some with games in them, others with waterfalls or fountains, and there was a huge one for the kids with a massive ball pit in the center! There were hot springs in the “ruins” of an old ship, and all sorts of other cool pools. Trent and I made our way around the different pools enjoying the people watching and relaxing. After a while, we decided we needed a break. We were able to snap a few winning shots without detection…

We went back through the locker rooms and got these clothes that you are required to wear if you leave (kind of “scrub”-like) and then met upstairs, where someone had told us there were snacks! Indeed there were, but many of them were not necessarily appetizing to us. We stuck to fruits that we knew and recognized, and drank some juice while watching others playing in the springs. 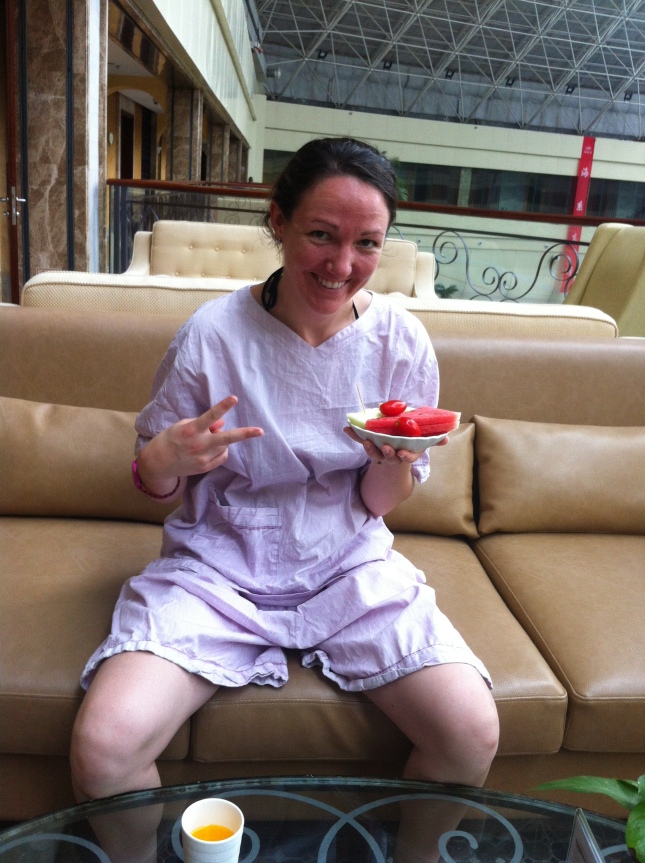 After we’d rested sufficiently and eaten enough to tide us over, we changed and went back downstairs. This time, we decided to try out the outdoor springs. Here there weren’t any people watching. The weather was getting cooler, so there weren’t many people outside at all! We busted the camera back out and took some more photos out here where nobody seemed to care. You can see the ocean from some of the springs, although the view isn’t the greatest. It is through a chain-link fence that kind of detracts from the natural beauty. The hot water and the cool air were the perfect combination, and we spent the rest of our afternoon out here. 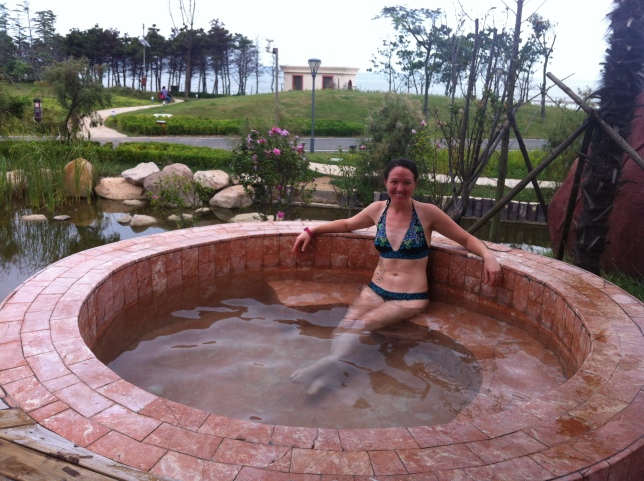 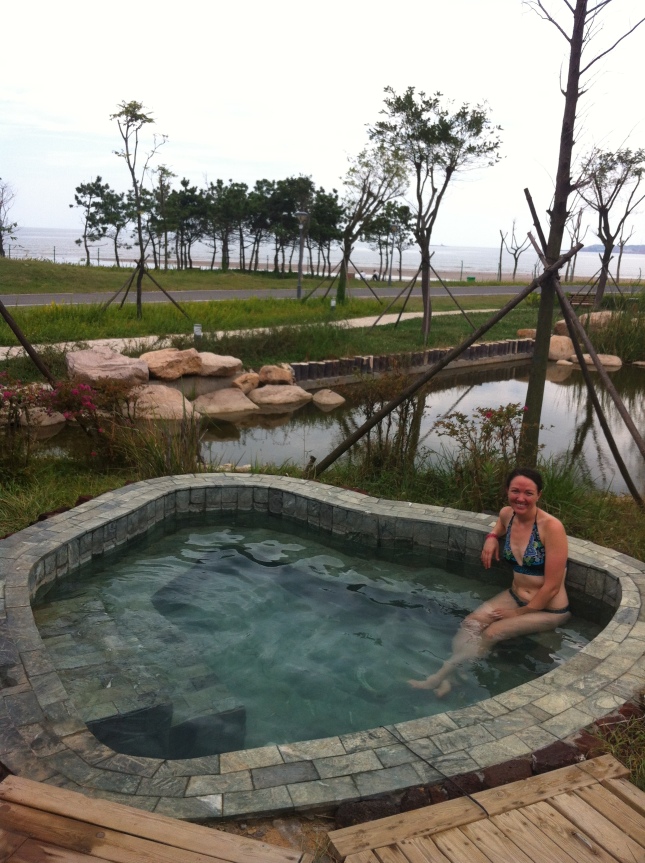 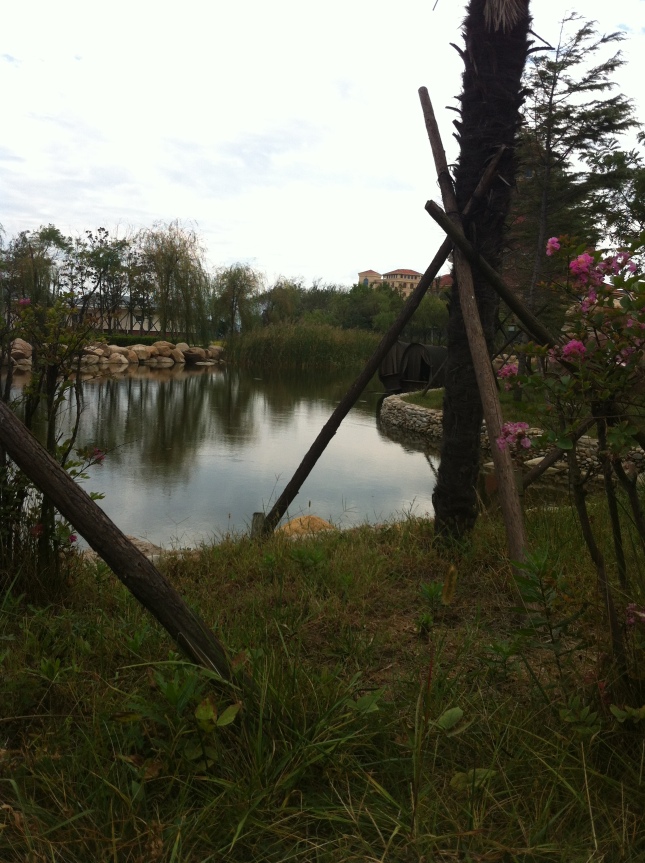 When we were sufficiently pruned up, we decided we’d had enough and we went back inside to change our clothes. But we’d seen how lovely the outside was, so we decided to go on a little walk. We ended up walking by the HUGE hotel we were going to stay at, and their lovely grounds, as well as out along the ocean. It was beautiful! 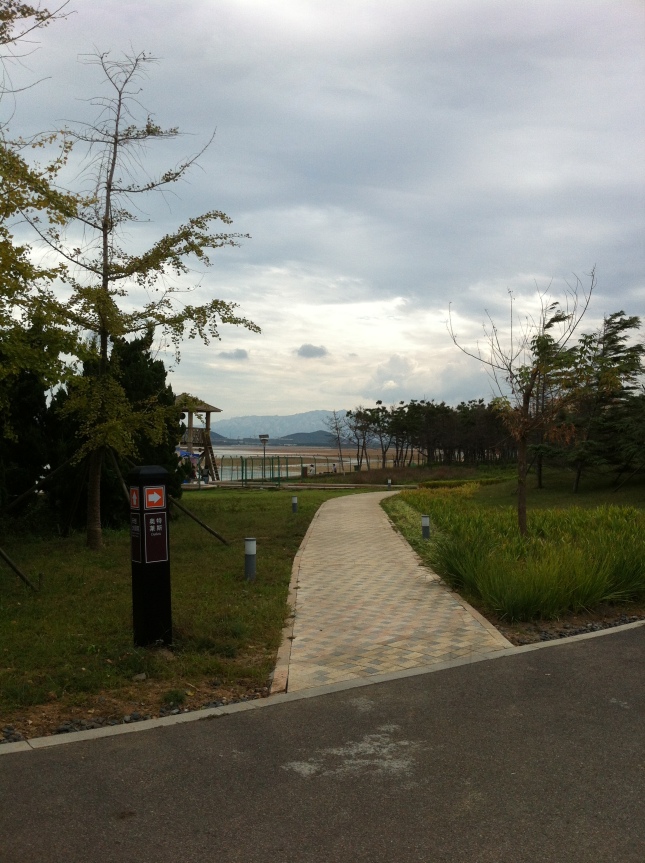 We figured out how to catch the correct bus back to take us back into Qingdao and enjoyed a lovely sunset on the bus. It was a great “end” to a great birthday weekend! 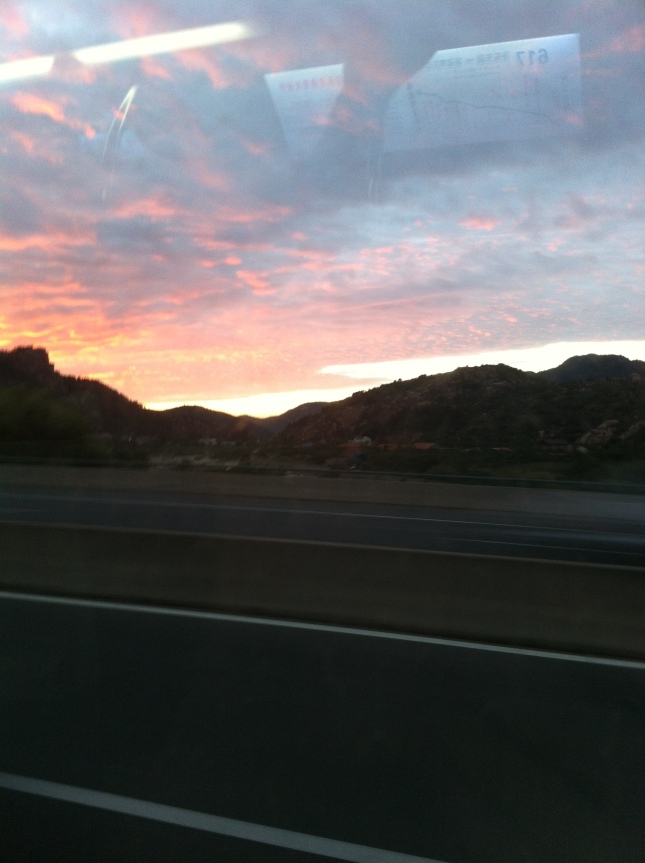 It was definitely worth going to.

We know one person since our going who came back with an awful rash. Be careful!

You could easily make this trip in one day if you left early in the morning and came back in the evening. One day of hot springs is enough!

I would suggest staying at the hotel that is connected, simply for the reason that the hot water makes you tired, and it sure would have been nice to go back to our room to chill for a bit between our times in the different pools.

Book online for cheaper entrance! Most of the websites are in Chinese, but you can find a friend to help you!

Posted by logsdonsbigadventures on October 7, 2015 in Uncategorized