In my previous post about Satria tea and coffee plantation, I wrote about the different kinds of teas and coffees that we were able to try when we were on a day trip in Bali, Indonesia.  But what I didn’t write about was the Copi Luwak coffee.

I never knew about Luwak coffee until I saw the movie The Bucket List with Jack Nicholson.  In the movie, he loves this coffee; after all, it is the MOST EXPENSIVE coffee in the world.  It sells for about $100 dollars a pound or in some expensive restaurants, $50 dollars a cup.  So when we were given the opportunity to try it, we said… yes.

Why the hesitation?  Well here’s how Luwak coffee is made… there’s this little critter called a civet, or as the natives call him, a luwak.  He’s pretty cute, as you can see below. 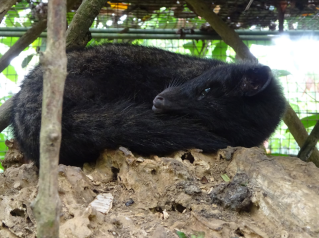 What’s not as cute is that he eats the ripest coffee cherries he can find and then while they are in his stomach they go through a fermentation process and then are passed out of the body through defecation.  From Wikipedia:

Producers of the coffee beans argue that the process may improve coffee through two mechanisms, selection and digestion. Selection occurs if the civets choose to eat cherries. Digestive mechanisms may improve the flavor profile of the coffee beans that have been eaten. The civet eats the cherries for the fleshy pulp, then in the digestive tract, fermentation occurs. The civet’s protease enzymes seep into the beans, making shorter peptides and more free amino acids.  Passing through a civet’s intestines the cherries are then defecated with other fecal matter and collected.

Why would anyone drink this then???  (And who the heck came up with the idea to try coffee from fecal matter???)  Apparently, this process is supposed to make the coffee more flavorful.  Is it dangerous, you might ask, since it’s literally been pooped out?  The short answer is no.  Even though the beans have passed through the civet’s stomach and digestive system, they have not been opened or otherwise compromised in any way.  Once they are pooped out, they are still like any other coffee bean.  They are cleaned, then roasted, and then voila- Luwak Coffee! 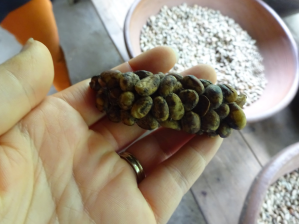 They showed us each step and explained the whole process- from seed to coffee.  From the poop (as you can see above), they clean the beans and then roast them.  Once they are roasted, they hand grind them to make the coffee.

Anyways, after our complimentary samples of the different teas and coffees they had, we decided to try a cup.  After all, “When in Bali…”  Normally, this kind of coffee retails for a very high price, and well, let’s be honest, Trent and I are “cheap.”  But it turns out that when you’re at the actual source, the coffee is not so expensive.  We ordered one cup of Luwak coffee, which their menu cleverly calls “Catpoochino,” for 50,000 Indonesian Rupia, which is the equivalent to about $3.70 USD.  For that price, why not try one of the most famous coffees in the world?  We knocked that one off the bucket list (as if it were ever on there).

Our overall consensus- not quite our “cup of tea,” well, coffee anyways.  I’m not really a coffee drinker in the first place, so I prefer a more mild brew (with a lot of sugar) when I do drink it.  This was a stronger coffee that was much bolder than my preference.  Trent IS a coffee drinker, but it wasn’t his favorite either.  We enjoyed some of their flavored coffees much more than this one.  But we don’t regret trying it, and we will always remember Bali and our catpoochino!  Would you try it?

Posted by logsdonsbigadventures on May 20, 2016 in Uncategorized