Gosh, time flies.  I think that each time I sit down to write these posts.  Jedidiah grows and changes so much each month that I can’t barely get it all down!  And once I’ve gotten it all down… I forget to publish it.  Like this post nearly 4 months later…

Here’s my feeble attempt at summarizing these three months.

General Observations:  In the past three months he has come so far!  He has learned how to dance (I think being around his cousins helped)- at church he loves to go up and twirl around with his hands raised in praise! It is one of the most beautiful sights!

Jedidiah has developed an affinity for small spaces.  He loves to crawl in and just hang out! 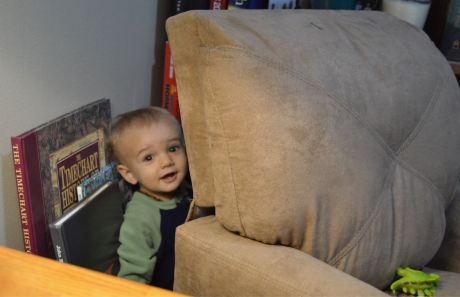 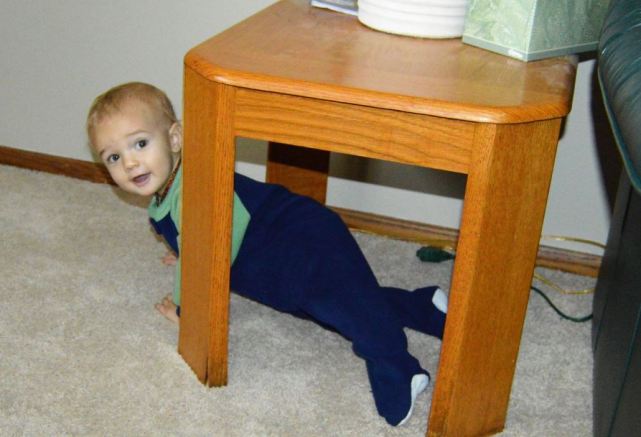 He loves animals and can identify MANY different ones (Where is the ___________?).  He knows cat, dog, horse, cow, sheep, pig, chicken, zebra, bird, gorilla, tiger, elephant, giraffe, camel, donkey, monkey, snake, and fish.  Jedidiah also attempts to make some animal noises and does “roar” (albeit timidly) and “neigh.” 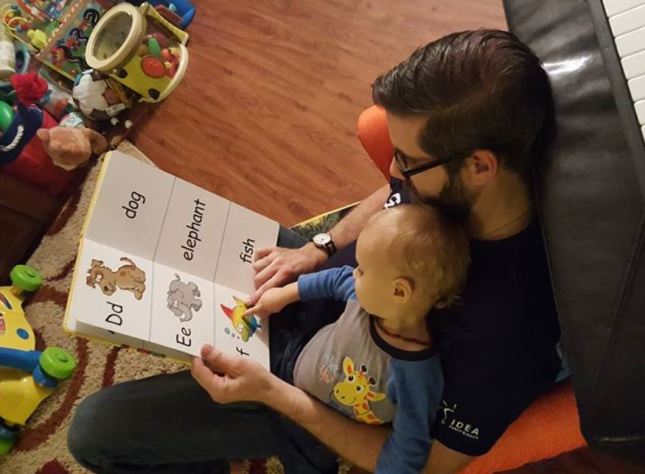 Our son has developed a love for books and reading, and sometimes when he’s quiet, I’ll go in his room to see what he’s up to and low and behold, there he is with his Bible in his lap!  It’s the most precious thing!

But he’s pretty content to read just about anywhere! 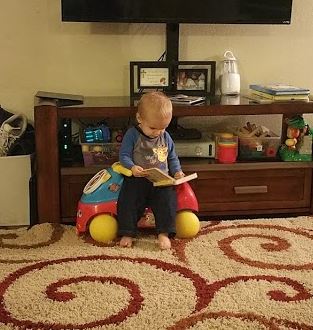 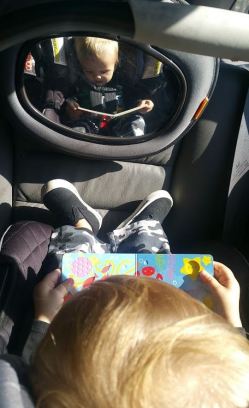 He’s also started using the potty.  We weren’t full-on potty training but we did know that he usually had to pee in the morning, so we put him on the potty just to see what would happen.  We were successful more than not, and we thought that he was starting to understand the correlation between having to go potty and actually USING the potty.  We’re definitely not there yet, but we did have a break-through moment the other day when he went in and sat on his potty in his clothes.  I asked him if he needed to go potty and so I undressed him and put him on the toilet, and he went pee pee!  SUCCESS!!!  Now if we can just make this a HABIT!

Jedidiah’s daddy made him a little “chill” box with some pillows and a blanket and he really enjoyed going in there to “relax.”  He liked to sit in there and eat his puffs!

He has since upgraded to a real couch of his own, compliments of his Nana! 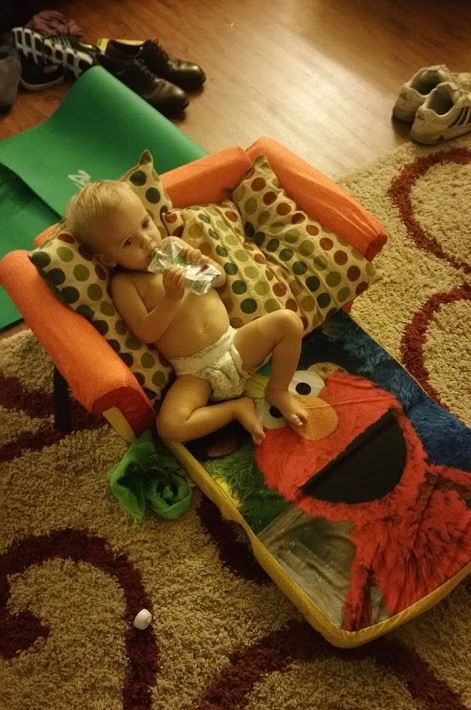 Body awareness: The kid knows most of his body parts and has taken a particular interest lately as to eyebrows and nostrils.  He LOVES to stick his fingers up our noses!  It’s gross, but he won’t be deterred.  He’s just super curious!  He can identify most facial features, toes, and hands in Spanish as well.  🙂

Jedidiah is also very helpful when he’s getting dressed.  I tell him “arms up” and he puts them up, I ask for his feet or hands or legs and he’s quick to respond.

Communication: His communication is improving daily and he is very good about “telling” us what he needs.  He is signing more and now signs for “eat” as well as for “milk,” “more” and “all done.”  We’re still working on “please” and “water.”

Jedidiah understands so much of what we tell him and he is quick to respond to commands.  “Please put that back,” “close that,” “open that,” “pick that up,” “give that to momma,” “go get your shoes…” which reminds me of a funny story.  We were over at Trent’s parents house and we were getting ready to leave.  I told Jedidiah to go get his shoes.  One shoe was VERY prominently sitting RIGHT in front of us on the coffee table and of course, we expected him to grab it and bring it right to us.  Instead he wandered off and we all thought, “Oh, well, he didn’t understand,” when much to our chagrin, he comes back around the corner with his OTHER shoe… Lord knows where it was!  But HE sure did!  And he absolutely knew what we were asking of him.  He can understand SO much of what we tell him!  It’s AMAZING!!!

Likes: BASKETBALL!!!  Goodness, he loves this game!  He’s so his momma’s boy!  *For the record, daddy loves b-ball too*  He can see a basketball or basketball hoop or basketball game from across the room and he gets SOOO excited about it!  I have one shirt in particular that I liked to wear when it was colder outside- it’s our team shirts from when we coached basketball in China, but every time I wear it, Jedidiah is constantly pointing to it!  One evening we went out to Momma Margie’s (a Mexican restaurant) and we sat down in a booth that just happened to have a basketball game going on right above it… the kid was in HEAVEN!  I think that was the most leisurely meal we’ve ever had out at a restaurant (at least since he’s been mobile).  He just sat there and WATCHED.  It was amazing.  He loves looking at basketballs in magazines- we spent nearly half an hour one morning going through a Tim Duncan tribute magazine.  Every page we turned he’d point to the ball.  We also spent a little bit of time visiting daddy at work.  He had to finish up his lunch duty so we joined him in the gymnasium (which is also their cafeteria).  The second we walked in, Jedidiah started “air-shooting” at each of the hoops that was up.  It was amazing to watch (he’s got great form too!).  It was like he was working on his shot the whole time!  The kids found that pretty entertaining (daddy and I did too).  He also has a basketball hoop outside that he loves to play with. 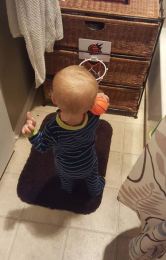 He is also still enthralled with the kitty cat!  He lights up any time he sees him and of course, chases after him shrieking with delight, which, in turn, sends the kitty cat running off, scared of the kid.  Jedidiah is really gentle with him though and the kitty cat will let him pet him if Trent or I are close by.  Jedidiah hasn’t quite grasped that the kitty cat doesn’t like to play with balls.  And since he’s always carrying one, he wants to throw it TO the kitty.  Despite having explained it time and time again, he simply doesn’t understand that the kitty doesn’t want to play with him.  Another cute thing he does is feed the cat.  He loves to give the kitty cat some food.  I let him dump the scoop of food in the kitty bowl, but he really wants to FEED the kitty.  He’ll pick up one little piece of cat food and walk after the cat trying to get him to eat it out of his hands.  I try to explain that one to him too… but someday he’ll get it.  The cat has a few holes that he can squeeze under to get underneath our fence and anytime he runs off, Jedidiah stands by the hole and squats “calling” for the kitty to come back.  It’s so cute to watch (and kind of sad too).  For now, the two of them are buddies but the cat is smart and keeps a safe distance from him! 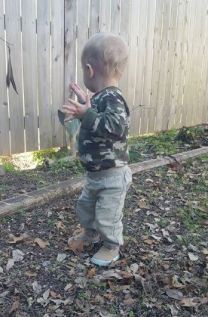 Other than that, he still loves being outside and as always, he loves his acorns.  The best way to be out and about on a walk is to have at least one in each hand!

Another thing that keeps us laughing is this little game he loves to play when he gets in the car.  He just peeks around the car seat at Trent or myself and laughs and laughs.  He’ll hide, then pop up.  We’ll hide and then pop up.  It brings lots of giggles! 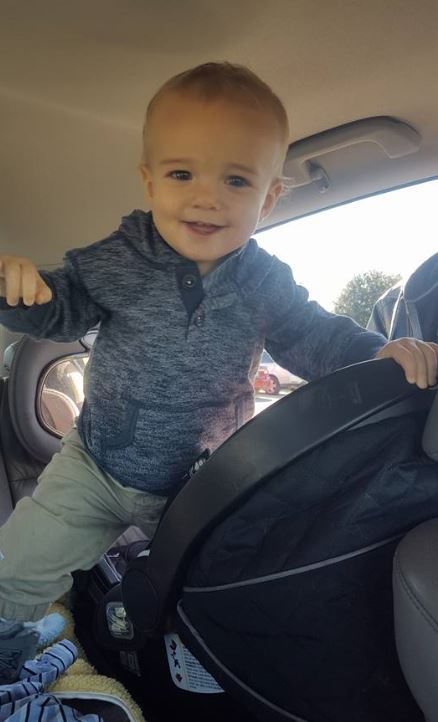 …And spend some time with his great grandparents!

Posted by logsdonsbigadventures on June 27, 2017 in Uncategorized