So, I don’t know if you’ve heard of this trend called “smash cakes” but basically, on a child’s first birthday, you get them a special small cake and just let them go to town on it!

We had seen many of our friends do this with their little ones and decided that since Jedidiah’s first birthday was in the middle of the week and we weren’t doing anything special otherwise to celebrate it (until his birthday party that weekend), that we would get in on this “smash cake” business.

Now I’m pretty picky about what I give Jedidiah to eat.  I am a fierce advocate of healthy foods and I really believe that what we put in our bodies directly affects how our bodies function.  That being said, Jedidiah really hasn’t had any sugar (except for what’s naturally found in fruits) up until this point.  So I didn’t want to go and ruin that to give him an entire cake on his first birthday.  Thankfully, many other like-minded momma’s have gone before me.  I found a good, healthy smash cake recipe online and I got right to work baking it!  Of course, as a busy mom, I didn’t have loads of time to do this, so of course, Monday night, I’m scrambling to get the cake baked so that I can frost it the next day and have it ready for him that evening.

After I finished my workout, I donned my baking apron and got to work.  The recipe was simple and called for real ingredients!

2. In a separate large bowl, mix the flours, baking soda, and cinnamon together.

5. Spread the batter into the bottom of the pans.  (I only had one pan, so I had to do two rounds) 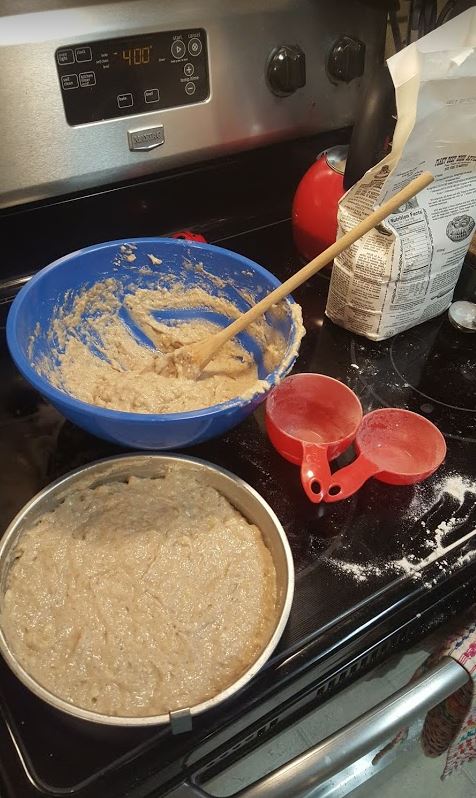 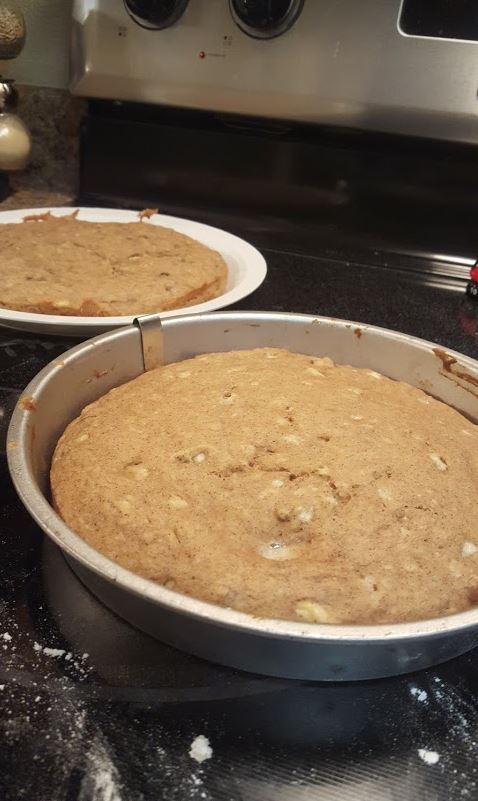 7. Cool the cakes before frosting.  If you used the 8″ or 9″ pan, then use an overturned smaller bowl to cut out small cake rounds.

Well, I had seen on another blog that you could cut up banana slices (in case you didn’t already use enough bananas) to add a little more height to the cake between layers… I don’t know that I would recommend this as it made for a harder time frosting it, and it didn’t really add that much more height.  Here it is pre-frosting.

I let the cakes cool and then put them in the fridge so that they’d be ready to frost the next day.

Of course, the next morning as I pulled up the recipe to make the frosting, I realized that I didn’t have enough cream cheese. So I ran to HEB that morning and returned, ready to whip up the frosting and have everything ready!  I had set out the other container of cream cheese that I’d bought and the apple juice while I shopped so that they would both be soft when I returned.  Anyways, when I got Jedidiah down for his nap, I decided to get after it… EXCEPT I didn’t read the recipe closely enough and put in the entire can of apple juice concentrate (instead of the half cup it called for).  I didn’t realize this until I had already added all the other ingredients and it was just far too runny.  I couldn’t figure it out… and then I looked back at the recipe and did a major hand-slap to the forehead.  Geesh!!!  Total mommy brain!  SO I had to go back to the store a second time that day to re-purchase all of the ingredients that I WASTED because I wasn’t paying enough attention (that’s what you get when you try to rush things and get them done during nap time).  Anyways, this time I READ the recipe and actually FOLLOWED it!  The frosting turned out much better the second time around.  Here is the recipe that I used.

Anyways, finally the cake was frosted and ready to go!  I had made a banner for his party that we got to use during his cake smash as well.  We hung that and a few other decorations, threw in a few balloons, and we were ready to go!

We set our bubba down next to that cake and firmly expected him to go to town!  He is a HUGE eater so we figured that he would devour this cake… much to the contrary, we had to force him to touch it!  He began curiously pulling the number 1 candle off of the cake and trying to hand it to us.  The expression on his face said… “what is this?”  Followed by, “Is this some sort of trick???” 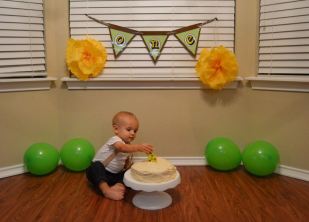 After that he got up and walked away.  So we brought him back and set him down beside the cake and I put his hand in it.  He was NOT a fan.  He looked at his hand and then at me like… “get this stuff OFF of me!!!” 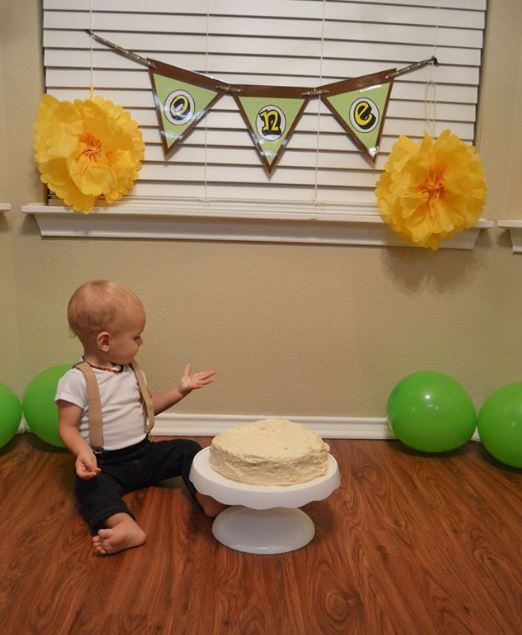 He fussed, so I got up and wiped off his hands.  He then wandered off again.  This was not going like we had planned!  Trent had to coax him back a second time and tried to give him a taste of the frosting… surely, this would entice our little guy to dig right in!  As you can see, he’s still not so sure. 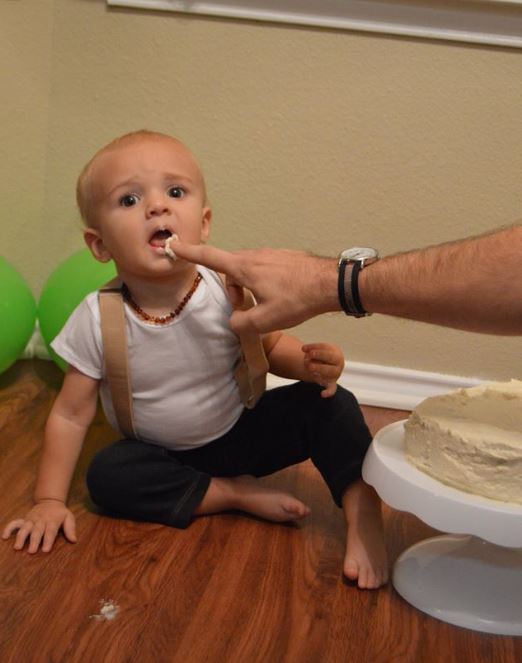 After that, daddy thought, “what the heck… let’s try putting his hands in it again” and you can see that that was NOT successful.  We had a sad baby.  Momma wiped his hands down a second time.  At this point, daddy took to the cake with a spoon and churned it up a bit so that Jedidiah could get at it without having to dig in the frosting first.  He definitely considered it, but still didn’t go after it.

Next, we tried a spoon.  Daddy loaded up a bit of cake and gave him a bite.  NOW we were talking.

He picked at the cake a little bit with his hands, but really still didn’t want to get dirty, so we gave him the spoon and let him try eating it that way.  He started with his much more proficient left hand, but lately he always wants to switch the spoon or fork to his much less accurate right hand, which he did in this case as well.

When that didn’t work so well, he went back to his hands, but was very careful about just getting pieces of cake and not any frosting.

He started walking around with his spoon and even brought mommy and daddy a bite. 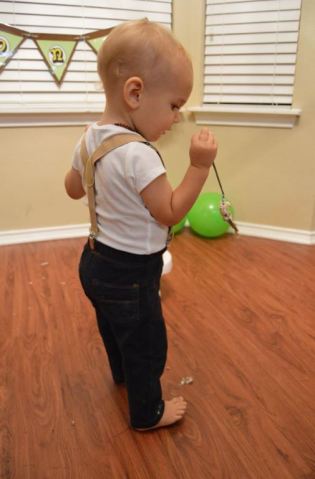 After a while, he got distracted by the balloons and tossed them around a bit and then would come back for a bite from momma. 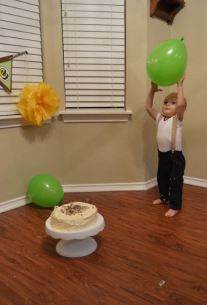 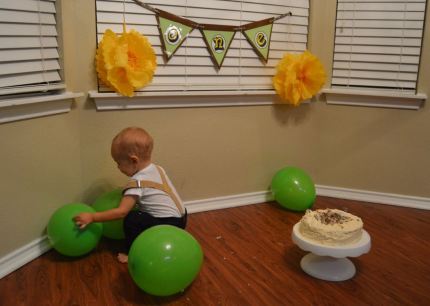 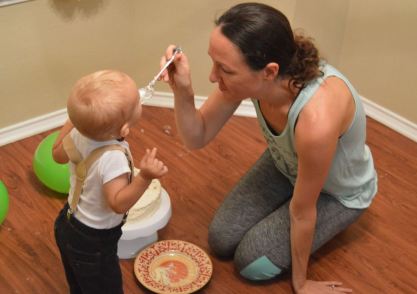 This went on for quite a while… back and forth… back and forth.  Then my parents called us on Skype to sing him “happy birthday,” so he ate and Skyped at the same time.  Once the call ended, he’d eaten plenty and we decided to clean it up!

Our “cake smash” didn’t go quite as planned, but it was still fun to watch our little one react to this situation.  He has such a big personality already and I would totally do it over again!

Have you tried a “smash cake” for your little one?  How did it turn out for you?!?

Posted by logsdonsbigadventures on December 4, 2016 in Uncategorized