Our little bubba was 10 days old when we left on our first road trip.  It wasn’t a terribly long or complicated one, but we did decide to drive to the Dallas/Fort Worth area.  Why?  Well, to get our little guy circumcised.  Now, you, along with many others are probably asking the logical question, “WHY?”  Why would we drive all the way to Dallas to get Jedidiah circumcised when there are plenty of places right here in San Antonio that will do it?  Well, here’s our reason.  Rabbi Mike.  Let me explain.

In our birthing and newborn classes we learned about all the different options for birth, after-birth, etc.  Circumcision was one of the things we talked about.  There has been a lot of research lately done about circumcision and the amount of pain actually felt and remembered by the child.  The research was convincing enough that Trent and I were seriously considering not circumcising our little boy at all.  We cringed at the thought of him being strapped down on a plastic bed without us present and having to undergo a procedure with harsh instruments like a Plastibell that can take 10-20 minutes to perform.  We just couldn’t justify putting him through that kind of pain for what now-a-days is a more cosmetic surgery than anything.

That being said, our faith is very important to us and circumcision was originally a command given to the Israelites to set them apart from other nations and peoples.  It was an outward sign and foreshadowing of the “circumcision of the heart” that would be revealed through Jesus.  Trent and I still thought it was important (even though the Bible makes it clear in the New Testament that outward circumcision is not what God desires; rather, he desires our hearts).  Here’s where Rabbi Mike comes in.  He came recommended to us by our doula, Shelby, as well as by some friends who knew people who had used him and had been very satisfied.  Initially when we contacted him, we didn’t realize that he was based out of Dallas, but after looking at his webpage and reading about his techniques and some of the testimonials of families, we decided it was worth the trip.  I will link his page here in case anyone else is interested.  He is a mohel (someone who specializes in circumcisions) who travels all around the U.S. doing circumcisions.

Click on “brochure” to read more about what he does.

So, after talking to him on the phone, we had set up an appointment for Wednesday, November 26th at 1:40pm.  Initially we were going to try to drive up to Dallas (about 4 and a half hours away) and back in the same day, but then thinking better of it (and realizing that the next day was Thanksgiving and there would likely be  a lot of traffic), we decided to try to head up on Tuesday instead.  I got in touch with my aunt and uncle (who is also my Godfather) who recently moved to the Fort Worth area to see if they would be interested in some company Tuesday night.  Thankfully, they were very accommodating and told us that we could come stay with them for the night.

We headed out Tuesday afternoon, shortly after 1:30.  It had been our goal to leave around noon, but we are learning that with a newborn, things are much harder than that.  He runs the show now.  We drove all the way there, only needing to stop and nurse and change him a few times.  Jedidiah did great in the car, he slept nearly the whole way there! 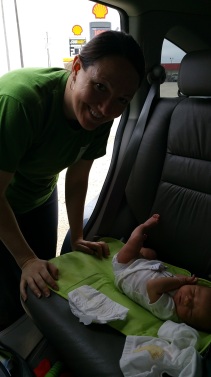 We arrived in Weatherford around 7:30pm and were welcomed by my nearly- 12 year old cousin, Ashley (who I hadn’t seen in almost 6 years).  David and Robyn came out and gave us a tour of their beautiful new house, then the cooked us a delicious dinner of pork chops, mashed potatoes, and green beans with mushrooms.  Trent and I ate like we hadn’t been fed in years and then we sat and caught up with everyone.  We had a really great time with them. 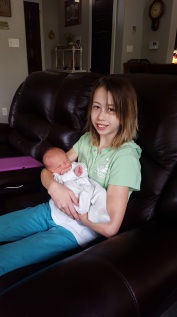 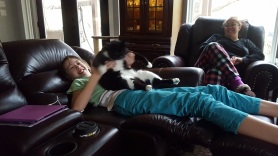 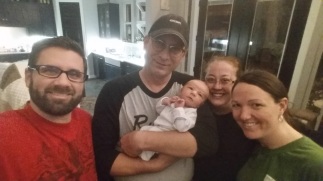 We hung out for a bit the next morning and then headed to Dallas to the synagogue Tifaret Israel where he circumcision would be performed.  I had forgotten just how big Dallas and Fort Worth were, but it took us an hour and a half to get from one spot to the other.  We arrived with enough time for me to nurse Jedidiah before going in.  There were lots of families with babies in the parking lot and we chatted with one family as we went in.  They had 6 boys (6!) and had had the older 5 circumcised in a hospital.  They were VERY pleased with the procedure that they had just had and raved about how much better it was than the previous procedures they had had in the hospital.  They helped put my mind at ease.  The car ride there had been a tough one for both Trent and I, we were both a little anxious for our little guy and worried about the pain he would feel.  No parent wants to see their child in pain!

We went inside where there were several other families who had just finished with their circumcisions, and the family before us was also from San Antonio, which made us feel not so crazy for driving all that way just to have this circumcision done by Rabbi Mike; clearly there were others who felt just as strongly about this as we did.

We filled out some paperwork and then the rabbi began explaining the procedure to us using his button-up dress shirt to describe what would be happening.  He stuck out his left arm and pulled the cuff over his hand.  He explained that this is how baby’s penis is right now (and then jokingly pulled it in towards his body and said that some babies penises are more like this).  Then he stuck his hand out.  “This,” he said, “is how we want the penis to be.”  He then showed us using the cuff again how he would insert a tool into the penis and would go around the penis to separate the adhesive tissues keeping the foreskin on.  He explained that this would hurt in the way that pulling off a Band-Aid would (not too painful).  That would be the worst part of the procedure.  Then he would push the penis back and clamp off the foreskin.  This would cut off all blood-flow and nerve endings to the area.  Once the clamp was on, he would slice off the foreskin using a razor blade.  This part he would not feel.  Once he finished, he would let the penis back out and, ta-da, the circumcision would be complete.

It was our turn.  We followed him back to a room and laid Jedidiah on a comfortable pillow.  We removed his diaper and daddy held his little legs steady.  Then the rabbi did his work.  In no less than 30 seconds, our baby was foreskin-free; the circumcision was complete!  He cried (but he started crying as soon as we started taking off his diaper, which he ALWAYS does… he hates being changed) but as soon as the procedure was finished, he quieted right down.  We took a couple of photos and then he suggested that I take him back in the main room to nurse him.  I only nursed him for a few minutes until he was asleep again, perfectly content. 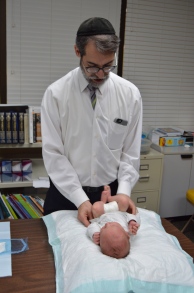 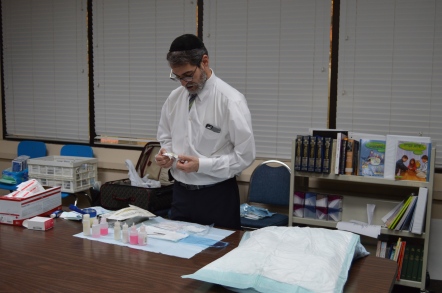 Then he told us how to care for it in the next few days and we headed back out… on the road again! 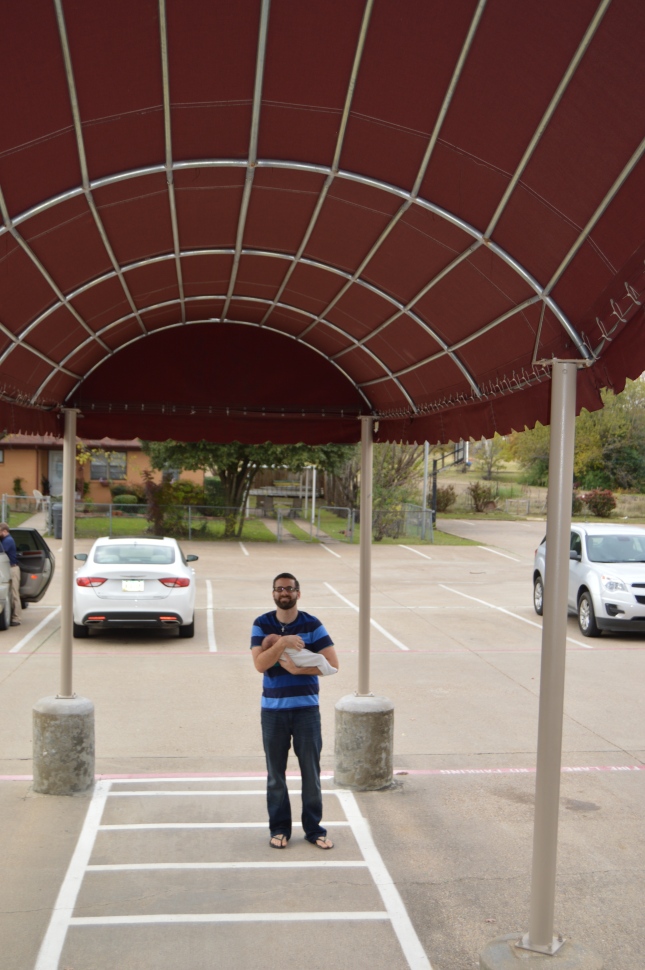 But the trip wasn’t over!  No, we had one more important stop before we went home.  We had to stop by and see Heather and Zach in Georgetown (just north of Austin) so that they could meet our little bubba.

We drove several more hours and in fact, didn’t get to Georgetown until nearly 8pm.  We were just going to stay for a short visit, but they offered to let us stay the night, and I’m really glad we took them up on it.  It had been a long day of driving for all of us and we were tired!  Plus, we already had our overnight stuff for Jedidiah from our night in Fort Worth.  Zach made us waffles and we watched Elf while passing baby Jedi around.  It was such a relaxing, enjoyable evening.  We are so blessed by these friends!

The next morning (Thanksgiving morning), we woke up feeling refreshed and ready to make the trip back home.  Zach made us eggs and made me some hot cocoa.  We ate together and then hit the road again, one final time before being home. 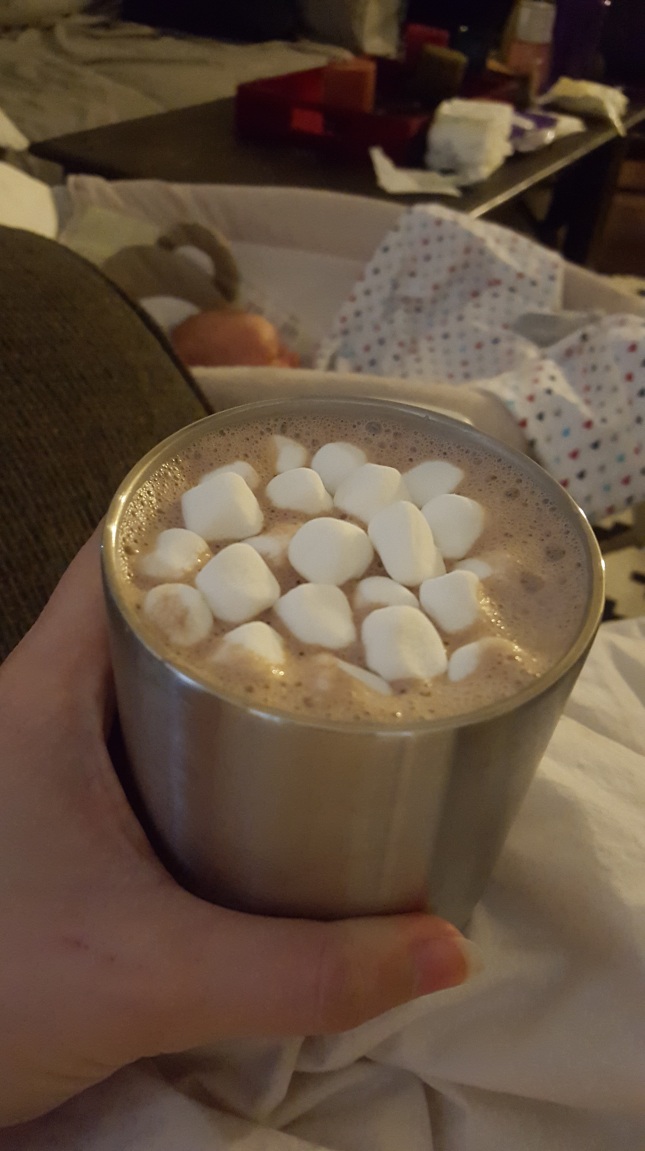 By noon, we were back at our house in San Antonio and were ready to get our Thanksgiving grub on.  We definitely had many things to be grateful for- our sweet baby boy, a quick and easy circumcision, time with family and close friends, and of course, FOOD!

Posted by logsdonsbigadventures on December 2, 2015 in Uncategorized