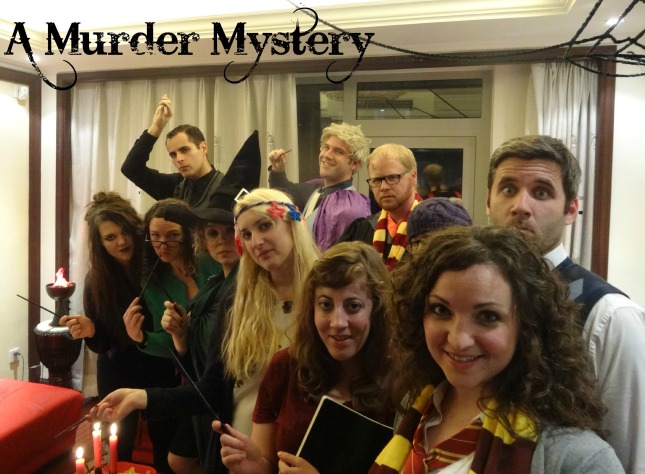 Rewind the clock two years to our first Halloween in China. Even though we had just moved there a few months prior, we had made some good friends through church and school. Some of our good friends, Zach and Heather Mosby, hosted this Harry Potter themed murder mystery party for Halloween. These two (well, mostly Heather) are born party planners. Oh my goodness, they are so good!

If you’ve never been to a murder mystery party, I highly recommend them. They are a lot of fun, involve some acting and role play, and are hilarious! Trent and I both received our parts a few weeks in advance and began planning out our costumes. Trent’s role was Ronald Weasley and mine was Rita Skeeter. Now, I wouldn’t call myself a Harry Potter “fan,” at least not in the sense that I know much about it. I enjoyed the movies but I don’t remember many details from them and I never had time to read all the books. Honestly, I didn’t even know who my character was- I had to look her up on Wikipedia to find out that she was an annoying reporter that likes to be in everyone’s business. I did know Trent’s character (I know Harry, Ron, and Hermione at least). After borrowing a few props from some friends, here were our final costumes.

When we arrived at Heather and Zach’s apartment, it was literally like stepping into a whole new world! The decorations and mood definitely transported us to Griffindor. They had candles lit, magic “wands” for everyone, party themed decor and appetizers out on the tables. It was amazing (even more so living in China where you can’t just run to the Dollar Store or Hobby Lobby for supplies). They even had a drink station where you could mix your own “potions.” So clever. 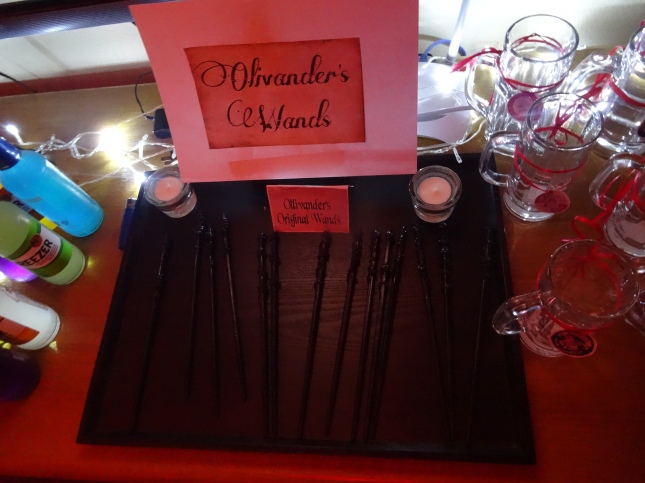 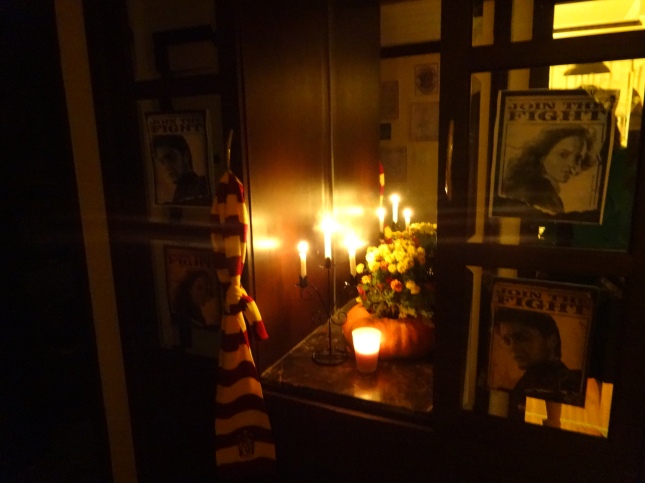 As we arrived, we mingled over appetizers and drinks in the living room. Even the appetizers were Harry Potter themed… she put so much thought and effort into the details! 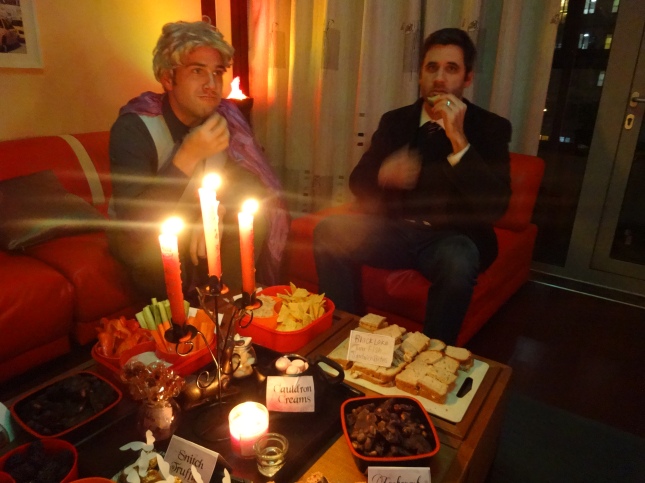 It was so much fun to see everyone arriving in character and to learn who everyone was dressed as. Here are some group shots of the whole crew.

After everyone had arrived, we moved to the dining room where the acting began. Heather had already set each place setting with a character card and the table was decorated with all sorts of Harry Potter themed stuff. The set up was amazing! 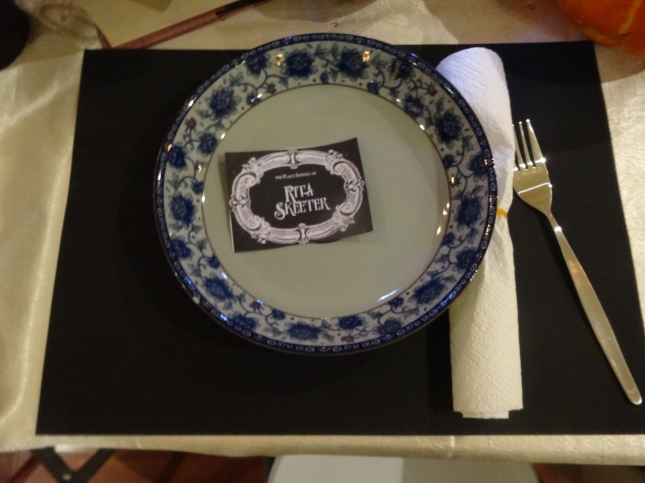 Everyone settled into their roles as we began our meals with a salad. Now, like I said, I don’t know very much about Harry Potter, but the cool thing about these parties is that during each round, you receive a sort of guide as far as what you are supposed to do, how you are supposed to act, and what questions you are supposed to ask. It was so much fun watching everyone engage in their roles. We laughed and laughed. We continued on to the main course, spaghetti and some delicious bread. The plot continued to unfold, accusations began to fly, and the banter was hilarious between characters. I have to admit, I was a bit jealous because my husband’s character was being extra flirty with Hermione… but it’s all a part of the game. Here are some pictures of our dinner and the acting that went along with it. 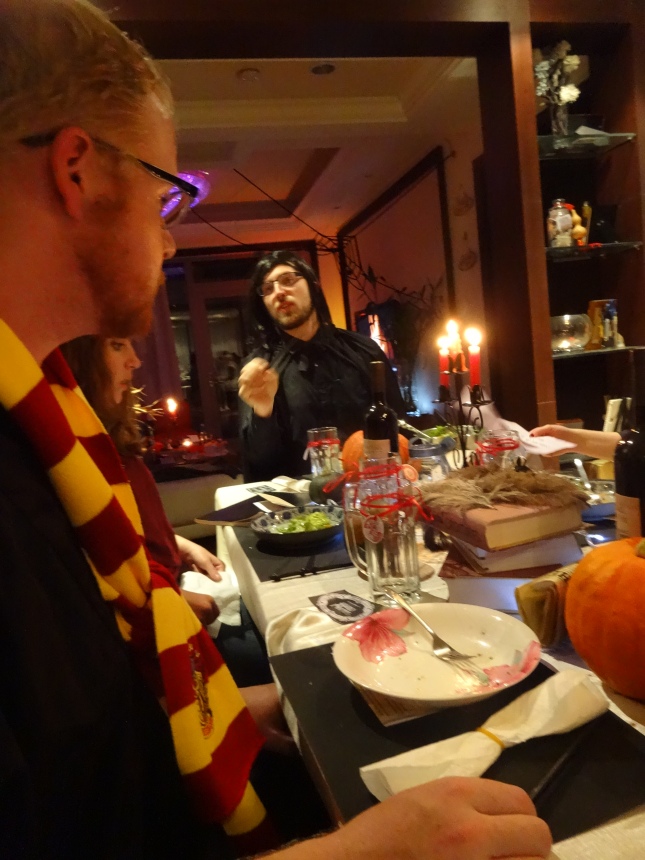 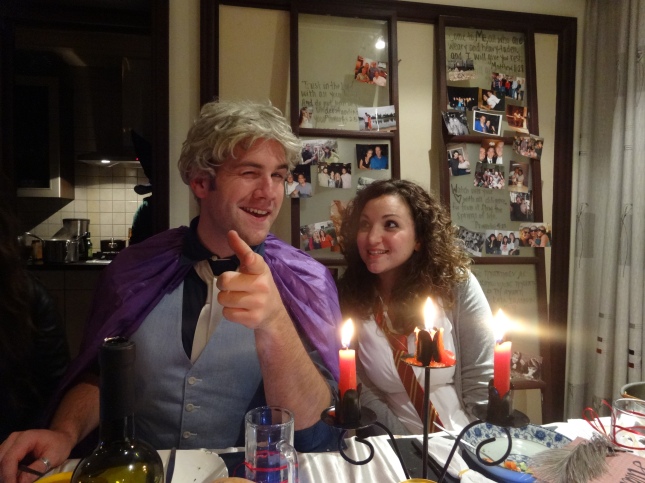 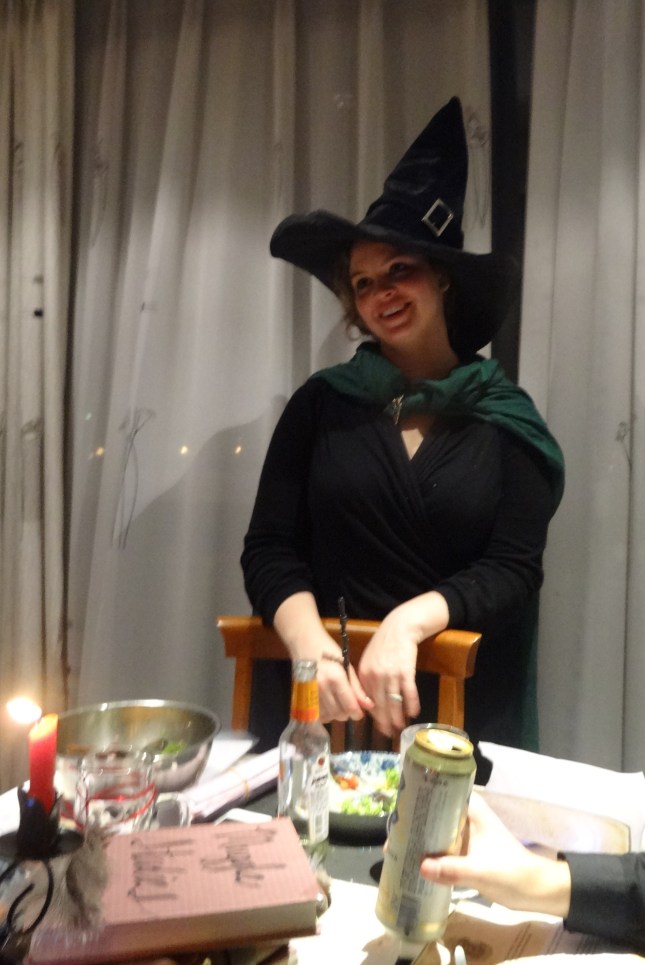 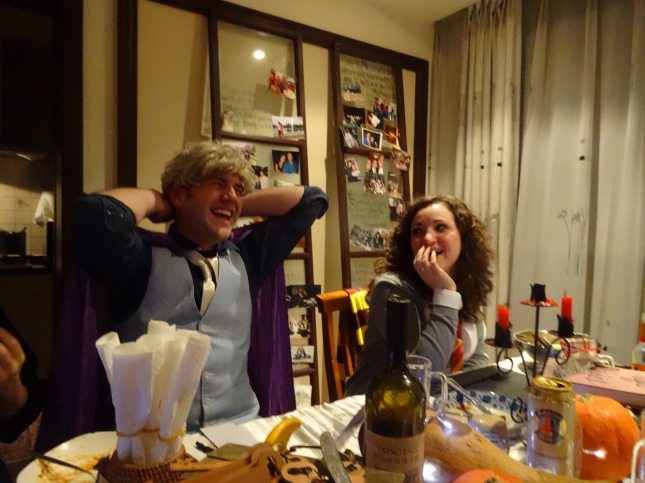 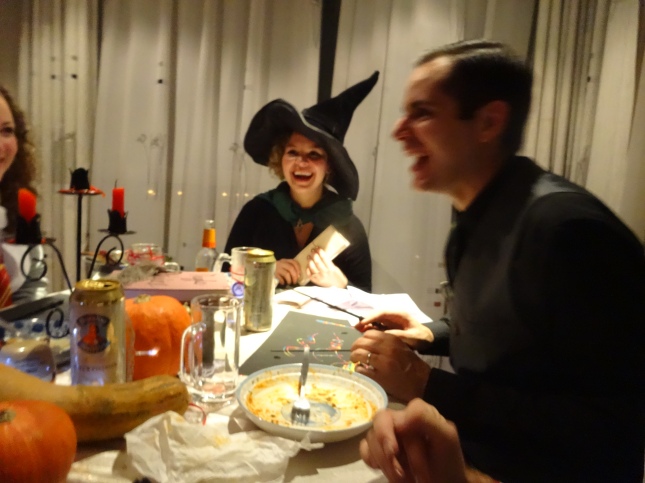 After dinner, we moved back to the living room to make our final accusations. We drank a delicious butter beer that Heather had made while munching on desserts. Everyone wrote down their guesses as to who the murderer was down on a piece of paper and then they were read aloud. I won’t tell you who the murderer was in case you ever get invited to a Harry Potter murder mystery. But I will tell you that it was a lot of fun! There were also awards given out at the end for best acting, etc. I won a small pumpkin for doing such a great job of portraying Ms. Rita Skeeter (I am pretty proud of that fact, since I didn’t even know who she was). We stayed and chatted and laughed until it was late. Then we thanked our wonderful hosts for a wonderful first Halloween in China and headed home. 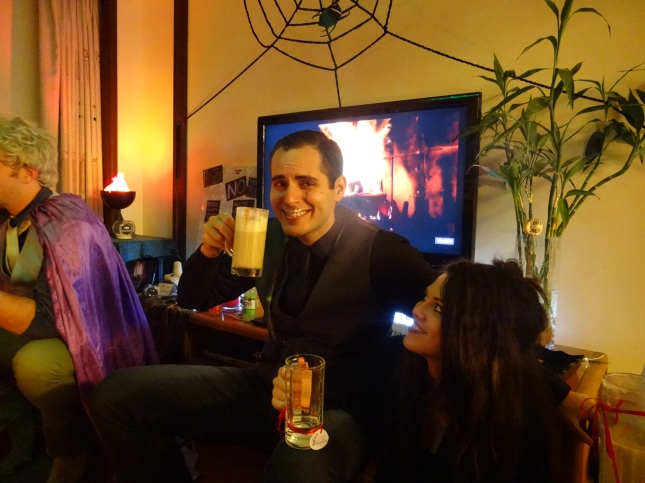 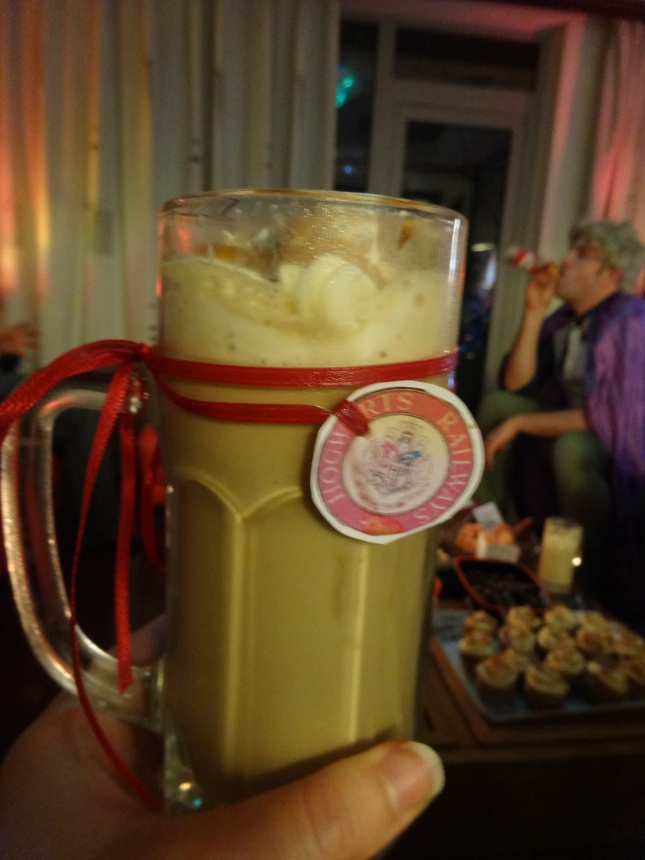 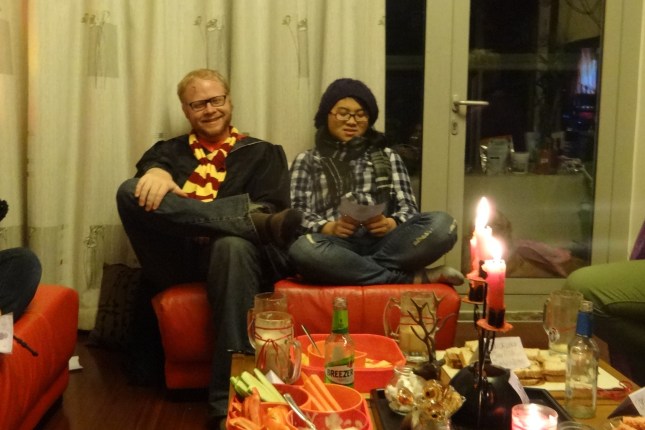 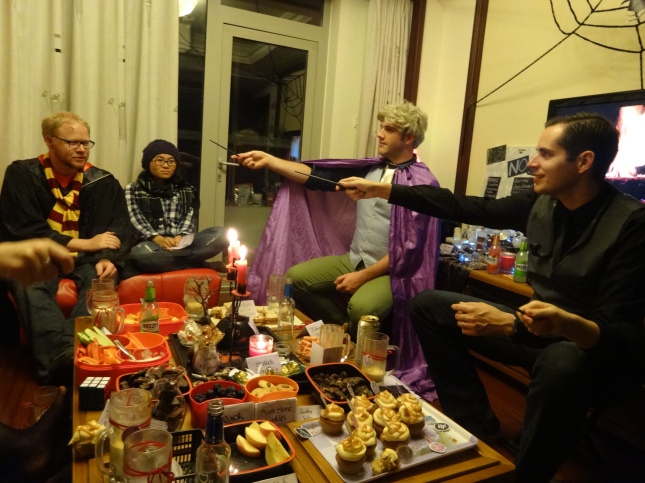 What a wonderful night. Happy Halloween everyone!

Posted by logsdonsbigadventures on October 22, 2015 in Uncategorized

One response to “A Halloween Harry Potter Murder Mystery”