I’ve decided to move to weekly “bumpdates” now that I’m getting to within a few weeks of delivery. This will help me keep up, because Lord knows, when this baby comes, we may not have time to do much blogging (or what I do have time for will be all about the baby)!

Week 37:
Jedidiah is the length of a bunch of swiss chard this week- measuring over 19 inches long and weighing in at about 6 and 1/3 pounds. He’s working on letting his brain and lungs fully mature before he makes his grand entrance into the world. Baby boy has been having lots of hiccups this week- I’ve enjoyed feeling these rhythmic little movements. It’s a nice change from the big shifts and kicks I’ve been feeling lately! 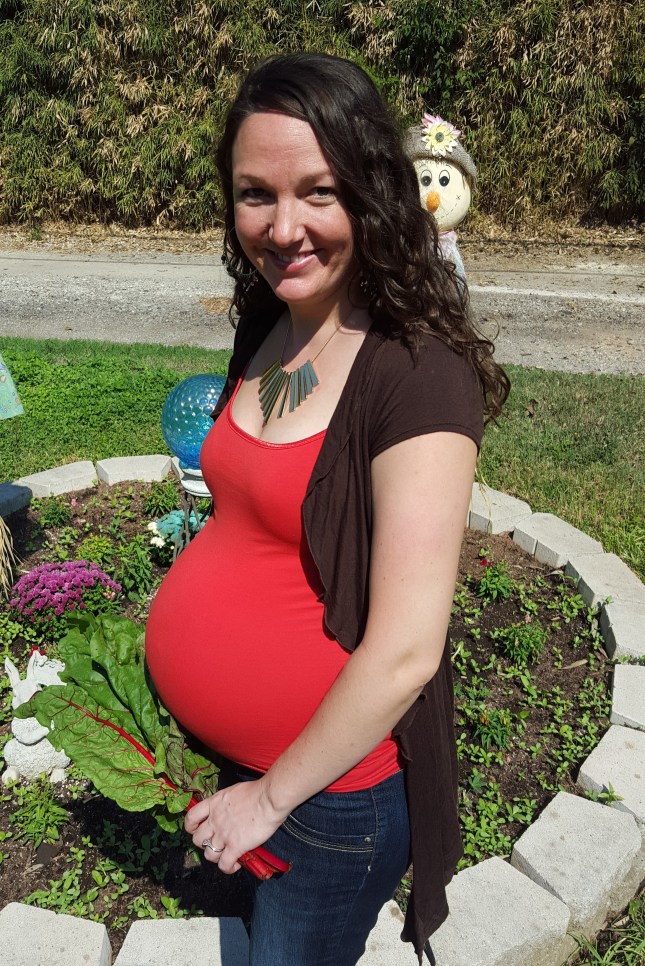 This week was kind of uneventful (for once!).

Sunday night we watched the season premier of The Walking Dead. Anyone who knows my husband knows that he’s a zombie fiend… he’s been counting down the days until this series was back. We don’t have cable so we went over to his mom and dad’s house to catch it. Their dogs seem to know that I’m pregnant and even the one who usually doesn’t give me the time of day (she only LOVES Trent), was snuggled up against my belly all evening. 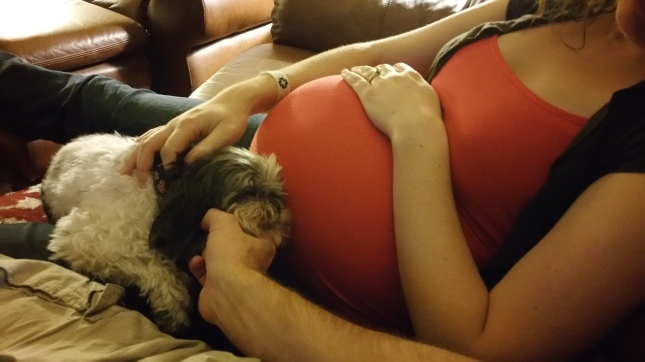 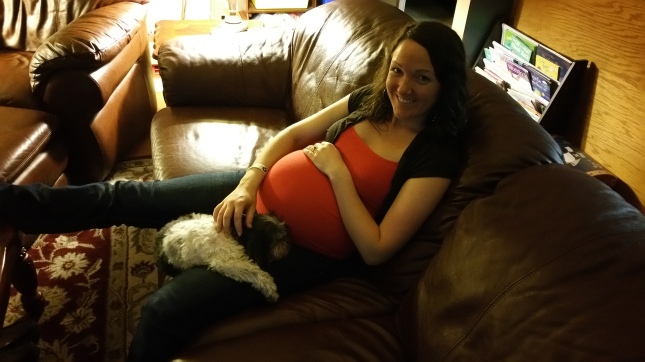 On Wednesday night, my friend Traci of T-Cup Designs took some maternity photos for us. We’ve been wanting to take some photos and even though we’re way past the recommended 32 week mark (they say that that is the best time for maternity shots), we made it happen. We met Traci up at Brackenridge Park and took lots of pics. Hopefully I’ll get them back soon and be able to post some of them.

Thursday night was our last birthing class. We’ve been attending Natural Birth Classes at our New Braunfels Family Birth Center every Thursday for the past 6 weeks. We’ve really enjoyed getting to know some of the other couples there and we learned SO much! Trent is so cute, he loves to talk about what we’ve learned and share it with everyone. This Thursday we had a little time to hang out and eat together as a class to celebrate our time together. And in January, after all of our babies are born, we will have a reunion party so that we can all meet each others’ babies!

The whole crew! One couple already had their baby. 🙂

Friday morning I spent with my friend Abby and both her kids and some other kids she watches every day (another friend’s kids). We had a fun time hanging out and it was really good for me to get out of the house and to enjoy some fresh air with them. We played outside, read stories, had a snack, and drew with chalk. When I left her house, I had just enough time to swing by Trent’s school to surprise him for lunch. We ate together and enjoyed the time to just hang out and then I headed back home. Friday evening we spent with Trent’s best friend Casey and his wife Shala and some other friends at their house. It was a nice time to decompress from the week and catch up before our lives are turned upside down in the next few weeks. 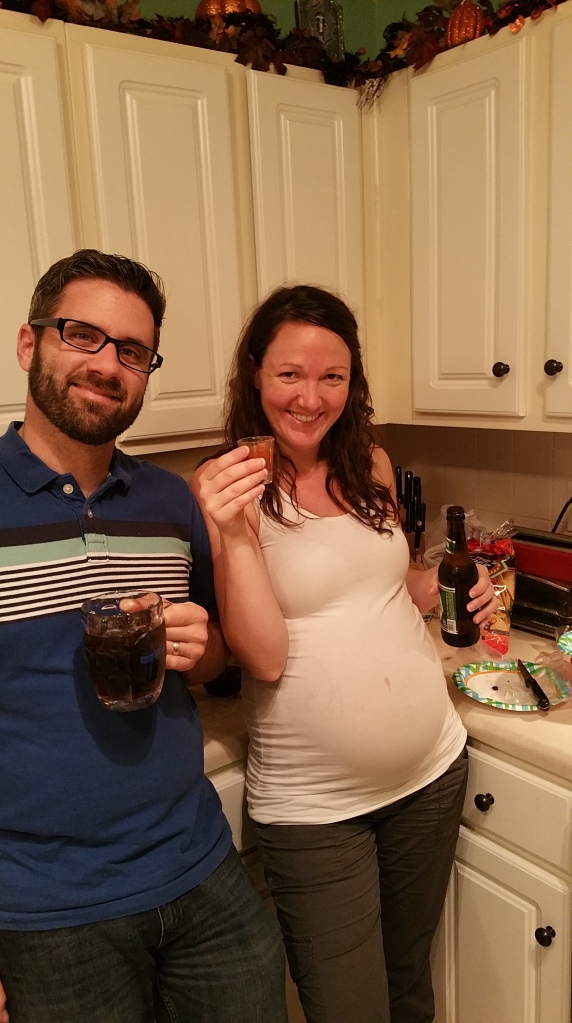 Although it probably looks pretty irresponsible, I’m drinking an O’Doule’s beer and there’s tortilla soup in my shot glass (I wanted to make sure it wasn’t too spicy). Rowdy pregnant fun! (Also note that my shirt is great at catching whatever I spill…)

Symptoms:
I’ve been having lots of dreams about the baby- some strange, some normal. One that made me laugh was that we were up north visiting my family and our baby (still very young) had a long, curly ponytail to like mid-way down his back! It was a bit ridiculous! Hopefully he doesn’t come out with quite that much hair!
I had to go to the chiropractor this week- my back was all sorts of jacked up. I think when baby dropped, it shifted a lot of my weight around and put strain on my back in some areas that I wasn’t prepared for. Anyways, he fixed me up and I’m feeling much better now!
Another thing that’s been happening a lot this week is that I’ve been having night sweats. Yuck! I’m not really hot at night, but my midwife says that it’s just because of the hormones. Of course, because of this, my sleep hasn’t been the greatest… when you wake up to go to the bathroom and you’re all sticky with sweat… it’s kinda gross.

Only a few more weeks to go!

Posted by logsdonsbigadventures on October 21, 2015 in Uncategorized