A “Date” day with my parents

Shortly after arriving in Minnesota, and about half-way through the jet-lag, my parents asked if we would be free for a “date” day the first Tuesday we were home. It was about a week after we arrived (we got in on a Wednesday) and our days were pretty free, since most of our friends and family worked during the days.

We began our day at one of my favorite restaurant “Baker’s Square.” Now my mother (shaking my head) likes to make up words like “teefers” (teeth) or “pancakies” (pancakes). So when she ordered her breakfast, she asked the waitress for “hash brownies” (hash browns), never stopping to think what she was actually saying. We’re used to my mom doing this so it didn’t even occur to us what she had just asked for until the waitress quite obviously stared at her in confusion and tried to explain that they only sell “regular” brownies here. That was a fun one to explain! Then the poor waitress moved on to my dad’s order and asked him how he wanted something cooked. I couldn’t resist a “half-baked” joke after that. We all laughed a lot and I’m sure the waitress thought we were absolutely insane, but it was a pleasant, light-hearted start to our day.

After a delicious breakfast, we headed to Fort Snelling, a historic site right at the meeting of the Mississippi and Minnesota Rivers. My dad has been a Civil War reenactor for many years so as a kid, we were frequently there, but Trent had never been there, so I thought it might be a cool place to visit. We arrived and wandered through the gift shop, playing around with some of the items as we went. 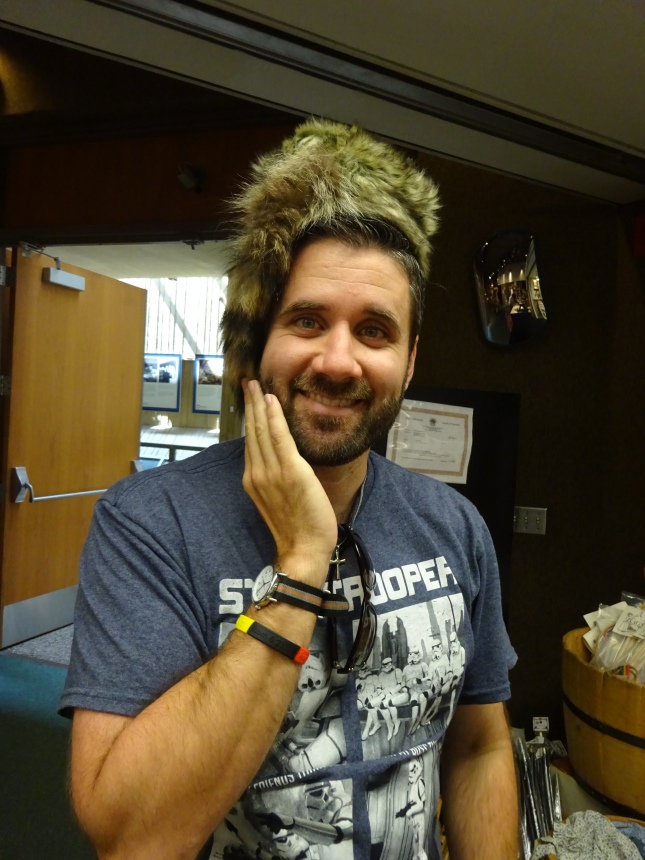 Then we headed down past the fort to the river and to a little island. While we were crossing the bridge, I noticed a big splash! I looked and at first, I thought it was a fish, but after looking a little bit harder, I realized it was a beaver! We watched him swim back and forth across the river and wander up onto the shore before splashing right back in and swimming some more. It was quite entertaining! 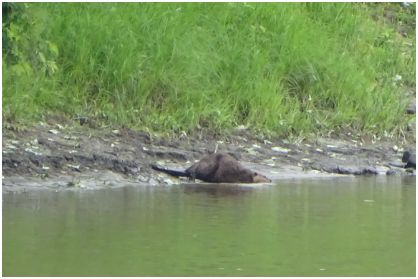 The mosquitos were bad (they jokingly *or not so much* are known as the Minnesota state bird) so we didn’t stay too long before wandering back up to the fort. Trent and I decided to buy tickets to go inside while my parents, both having seen it many times, were content to wait for us outside.
Trent and I went in and watched the reenactors fire off several rounds and follow commands I remember my dad using when I was a kid… “forward march!” “Shoulder, arms!” “About Face!”  And we watched them clean and re-load their muskets just like my dad used to do in our back yard.  I took lots of cool pictures of this part… only to later realize that NONE of them had recorded because my stupid camera is broken and won’t hold the SD card in (it keeps popping out).  Apparently it wasn’t clicked in far enough, so all those cool shots were for naught.  😦  After the demonstration, we walked around the grounds, exploring the different displays and taking in the different presentations (how they did laundry, what going to the doctor would have been like, etc.).  We really enjoyed the time there and it went by faster than we realized!  We finished by watching them shoot off the cannon and then headed back outside to meet my parents. 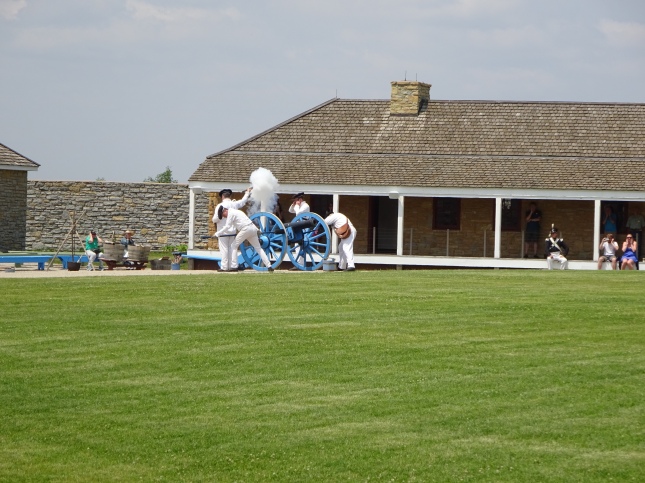 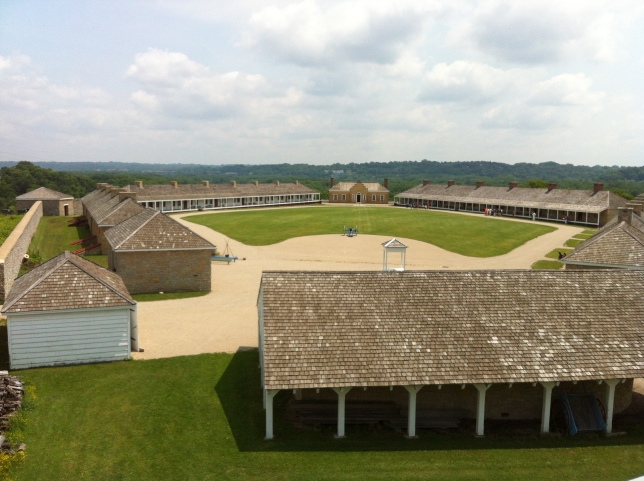 Our next stop… Lake Harriet.  Minnesota is obviously known for its lakes… our licence plates alone boast at least 10,000 of them (even though there are actually far more than that).  The Twin Cities have some great lakes that are fantastic for walking/running/biking/rollerblading/any type of physical activity.  We decided simply to walk.  Not too long into our walk, we all had a “hankering” for a snack.  It had been several hours since we’d eaten breakfast, so we decided on ice cream!!!  We all got mint-chip (not something I ever got in China) and walked while we enjoyed our treats.

Right off of Lake Harriet there are some beautiful rose gardens.  We walked through them and enjoyed looking at all of the different kinds of flowers! There is also another “Rock Garden” across the street that we enjoyed walking through.  It has a nice man-made waterfall and is very serene and peaceful.

At the end of our walk, we were all hungry again, but this time for some real food!  We decided to go to TGI Fridays for dinner.  We all had delicious meals and finished with my personal favorite- the brownie obsession!  SO GOOD. 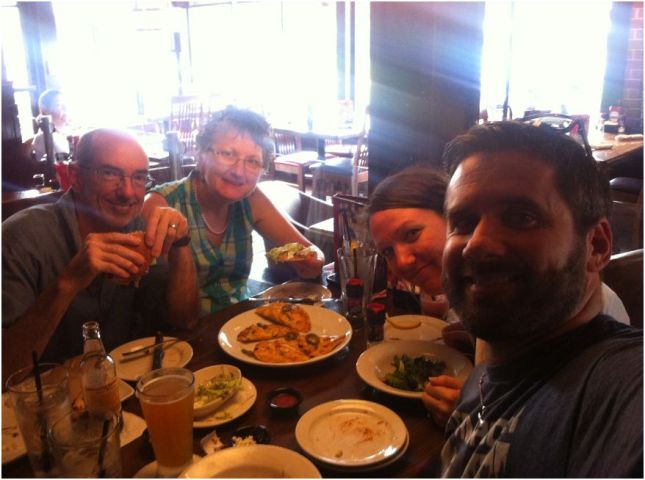 After that, we swung by my sister’s house so that I could change into some pants before heading to my siblings’ softball game (whatever defenses we can take against mosquitoes, we do).  Now when I say “my siblings'” softball game… I really mean that this is basically a family affair.  This was only a men’s league, so technically my brother is the only “official” sibling on the team, but my brother-in-law is also on the team, as is my sister’s boyfriend, as is my brother’s “boyfriend” (my adopted brother) and my brother-in-law’s brother.  Lots of brothers.  My sisters were both there- Christie is the official score-keeper and Jackie is the cheering section.  It was a great night for softball and Steve (my “brother”) hit two home runs.  Pretty exciting stuff. 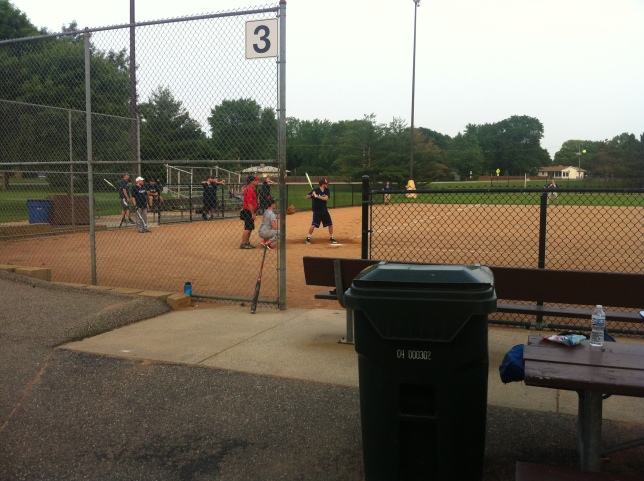 After all of that, we can say that we were pretty exhausted!  But it was a great day!  Thanks mom and dad!

Posted by logsdonsbigadventures on August 3, 2015 in Uncategorized