What will baby “Trangie” be? 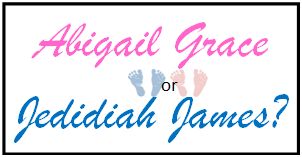 The time has finally come: the chance to find out if we’re having a boy or a girl! And as much as we have been anticipating this moment, I somehow feel unprepared to know. For so long, being 16 weeks pregnant seemed so far off, so to finally be here seems surreal. We go in for a scan today and we are really hoping that the doctors will be able to tell us if baby “Trangie” will be “Jedidiah James” or “Abigail Grace” (I think baby might be scarred to know that it was called “Trangie” for nearly half my pregnancy).
Of course, many things have to come together for us to actually find out today. Most hospitals in China will NOT tell you the sex of the baby- mostly because of the mindset coming from the “One Child Policy.” Most Chinese men only wanted a son, so if they found out that their wife was pregnant with a daughter, they would make the wife abort the baby. I don’t think that the nurses and doctors here realize that in the West, we don’t so much care about those things; we would be happy with a boy or a girl. Trent and I will be going to a new hospital today- one that caters to a more international population. Several friends have been able to find out the sex of their baby here, although maybe later on in their pregnancies. At this clinic, Trent should also be able to see the ultrasound with me. At the other hospital, he has to wait outside the room (more about that in an upcoming “Chinese hospitals” blog). Anyways, we’re going in hoping for the best!
Trent and I have had a boy’s name picked out for what seems like forever. Long before we ever talked about actually having a baby, we had already chosen this name. Finding a girl’s name wasn’t as easy. We pored over hundreds (literally) of baby girl names and we had trouble finding one that we really liked. Here and there one would be a “maybe” but we really had a hard time deciding. So, here are the stories on both names:

Jedidiah is a name that I came across years ago while reading my Bible. I liked the name, but what really stuck out to me was the meaning. This was actually the name given to King Solomon, the wisest king ever to live. 2 Samuel 12:25 says that “Because the Lord loved him, he sent word through Nathan the prophet to name him Jedidiah.” His name literally means “Beloved of the Lord” or “Blessing.” I definitely expect that this little one will be a blessing! (Plus, Trent will get to have a little “Jedi” warrior to play with- he definitely likes the STAR WARS connection).

The middle name James has a lot of significance to both Trent and I. First of all, James is my favorite book in the Bible… who knew so much wisdom and sound teaching could be crammed into 5 short chapters! More importantly though, James is a family name; it is my grandfather’s name. He is a man who has been very influential in my life- teaching and encouraging me in the ways of the Lord. I also have/had two uncles named James, but one passed away many years ago. Trent also has an Uncle James who passed away only a few years back. I never had a chance to meet him, but from what Trent tells me, he was a loner, yet a very eclectic man whose home was like a museum of antiquities and randomness; he was also very gifted artistically and very intelligent. Jimmy was a poet and was very interested in Native American culture. Sadly, long before he died, he already felt like his life had ended because of the Vietnam War; he came back changed, different. In fact, he had a headstone made, even before his death, with the date he left for the war as his date of death. This uncle encouraged Trent to be himself, to be different, to break the mold and not care about fitting in. He was an outcast of sorts, but Trent admired him for many of his qualities.

Abigail is another Biblical name- actually the name of David’s third wife who was said to be “good in discretion and beautiful in form.” She had formerly been the wife of Nabal, a harsh man, who died for his own wickedness and sin. She showed wisdom and kindness to King David and his army as they were passing through her land and she not only prepared lots of food and wine for them, but also asked forgiveness for her husband’s poor behavior (he had turned the men away). The name itself actually means “Father of exultation.”

Grace has been a pervasive theme in both of our lives. Grace is what captured our hearts in the first place, and both of us have encountered amazing grace along our lives journeys. Early on in this pregnancy when things were so uncertain, I remember thinking, it’s only by grace that this pregnancy will continue. And from that time on, Grace has stuck out in my head for a name. It allows me to remember that everything we have is a gift of grace from God.

So there you have it. Whether it’s this week or in a few more weeks, soon we will all know whether baby “Trangie” will be an Abigail Grace or a Jedidiah James. We can’t wait to find out!

*Since writing this blog a week ago, we visited the doctor (who spoke English!), and she wasn’t able to determine the baby’s sex just yet. We will most likely find out in two more weeks at our 18 week checkup (and last doctor’s visit in China).*

Posted by logsdonsbigadventures on June 7, 2015 in Uncategorized

One response to “What will baby “Trangie” be?”