Will you go to prom with me?

Trent and I have been privileged to do something that a lot of couples who marry later in life never get the chance to do: go to prom together… twice. Last year we were chosen (nominated) by some of the girls on our basketball team to be chaperones. So, without any of the awkward asking or worrying about whether I would say yes or not, Trent and I got dressed up and I got to be his prom date- 3 years after we were married. Now prom at an International school in China is literally worlds different than prom in the States is. Let’s recap: 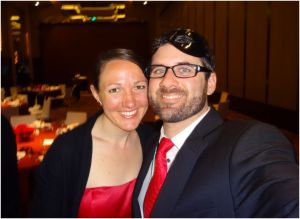 The night began much the same as it would have back home, with dinner, only instead of going out to a favorite restaurant with all your friends, our school booked out a room at the Hyatt Hotel, right on the ocean. We ate a buffet style dinner, lots of seafood but good desserts and side dishes. After dinner, things got interesting… the games began. In the states, we just dance; here, there is no dancing, just games. The evening began with some good old arm wrestling followed by a game of “soda pong,” essentially “beer pong” but with soda. For us Westerners, it seemed very strange to be playing this game at a school sanctioned event. Beer (oops, I mean soda) pong was followed by the strangest, possibly most awkward game I’ve ever witnessed: Pocky. There are chocolate covered sticks (for lack of better language) that are called Pocky. The game involved two people with one task. The participants had to draw a piece of paper with a length written on it- some were 10 cm, others were 1. Then it was one person’s job to hold the Pocky stick in their mouth while the other participant tried to bite it down to the length written on the paper. Basically it causes both people to get uncomfortably close and some were near making out! It was crazier than anything I’ve ever seen at a high school event before! 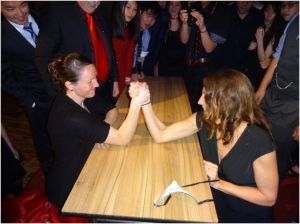 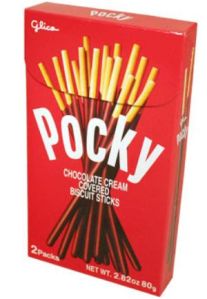 For a while, music played and people just mingled. Julia and I got our dance on for a few short minutes, indulging in a short bout of salsa dancing together. I love this kid! 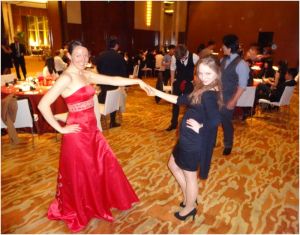 The games were followed by long speeches to the seniors, most of which were not in English. I didn’t understand anything that was going on, but the seniors did and I’m sure that the speeches were meaningful to them.
After that, we took a few photos in our masquerade masks and called it a night! 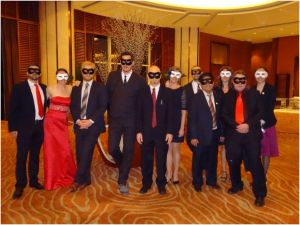 Year 2:
This night also began at the Hyatt for dinner. It was a similar setup as last year except that this year we had a room with a view. When we arrived, it was still light enough for us to see the ocean and even our apartments from where we sat. I also have to mention here that Chinese hotels are, well… very Chinese. In this case, that meant that the lights were all this strange, tacky orange color. So all of my photos of the night are cast in an orange shadow. 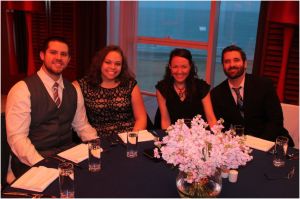 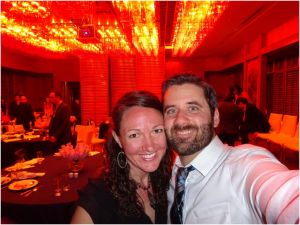 We began with dinner- the highlight of which was the tomato basil soup! So good! One of the best desserts there was a banana bread pudding with a delicious sauce drizzled over the top.

After dinner, we began with games. Trent and I had volunteered to take on Kelly and Antonio in a contest of the “Nearly-weds” (a spin-off on the game show, the “Newlyweds”). It was team Trangie vs. Pinjia. We were simply the ones demonstrating the game so that the kids would know how to play it. I was actually a little bit nervous! But as we started playing, Trent and I blew our competition out of the water. The questions were funny and we nailed them. One of my questions about Trent was “What animal is your partner most like?” I didn’t even need to think, and in fact started writing before the question was even fully read. I wonder which of you can guess the answer… 😉 He also had to liken me to an animal: a peacock, a fox, a cat or something else. Which do you think I was? Anyways, we won every round. Then it was the kids’ turn. The teachers had already paired the kids up and ironically, most of the “couples” were not couples, but best friends. One group was even brother/sister. I think this made it even funnier- it changed the dynamics up. I have to say that the “couple” I was most rooting for was Matthew Chick and Tony Song. These friends have hilarious “chemistry.” When Matt was guessing, they went 4 for 4, but when the partners changed places and Tony was guessing, he missed all of them. Watching people react to the answers that their partners had given was hilarious! I think I could have guessed some of these kids better than their partners did! Anyways, the game ended after a lot of fun and laughter. 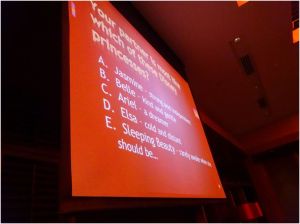 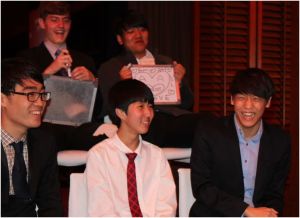 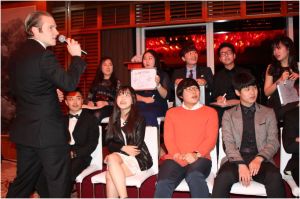 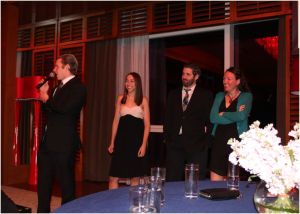 This game was followed by the limbo! I must say that I did not participate in this game, although back in my prime, I always won the limbo. I even remember doing it at one of my birthday parties when I was young. Some of the other teachers participated, Trent included. It was also very funny to watch. Some of the kids looked like Gumby, the way they could bend! 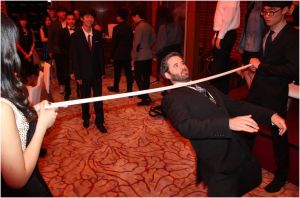 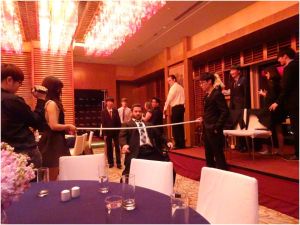 The last game of the night was a lip syncing contest. Trent and I had been asked by Julia and Michael to participate in this event on Friday afternoon after school… prom was on Saturday night. Needless to say, we didn’t have much time to prepare, but we decided to go with a classic 90’s band: The Spice Girls. Yep, “Wannabe.” It doesn’t get much more classic (or classy) than that! In addition to being asked super late, we were also notified that we were going to have to go first. Yikes! Oh, well, it’s a good thing we are so good at making fools of ourselves! Trent and I got up there and rocked it out. It really was a lot of fun. We were followed by other great acts, among which Matthew sang Justin Beiber, which if you knew him, is so very appropriate. The pretty boy singing the pretty boy’s song. And then Brian and Ace sang the duet from “Frozen.” Theirs was complete with choreography and everything! It was hilarious! 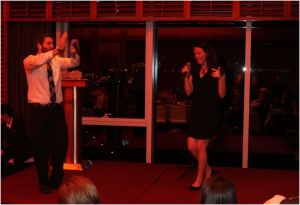 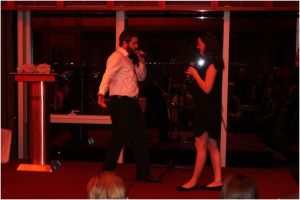 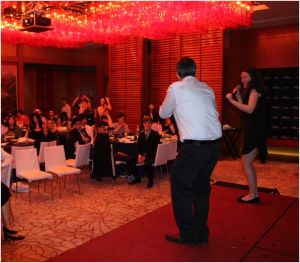 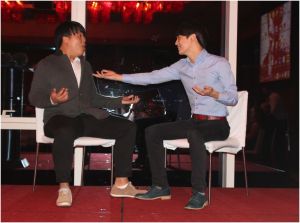 After this, they showed a video that the underclassmen made to wish the seniors farewell and gave out awards that we had all voted on: biggest flirt, best hair, Miss Congeniality, etc.

Then the night was over- Lex took photos on the red carpet and all the teachers headed down to the hotel lounge for a few drinks and snacks before heading home. All in all, it was a memorable night! 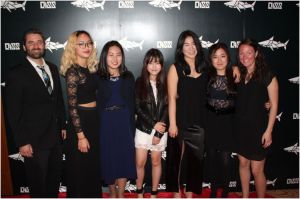 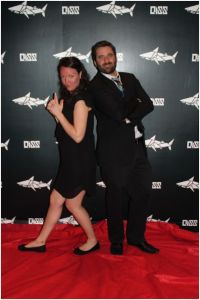 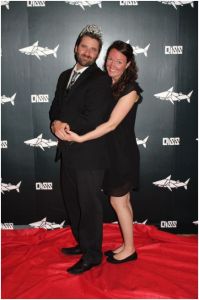 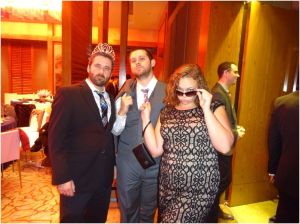 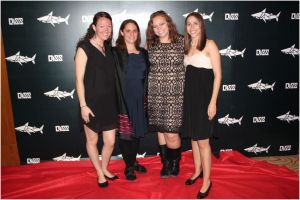 Posted by logsdonsbigadventures on May 2, 2015 in Uncategorized

← The next big adventure
Batu Caves →