An introduction to Laos

Laos: lush, vibrant, alive.  A land that is covered in green, sprawling mountains and a countryside lush with plant life and rice fields.  The people are kind and friendly, always greeting us with “sabaidee.”

Our trip to Laos began early in the morning as we left Chiang Mai by mini-bus to Chiang Khong where we would cross over the border and into Laos.  It was a 6 hour bus ride that took us along windy roads, sharp turns, and across bumpy terrain in a countryside scattered with big Buddhas, ornate temples, and beautiful mountains.  As we arrived in Chiang Kong, the bus dropped us off, and there… the adventure began.

(one of the temples we saw when we stopped for lunch)

Our entry into Laos was slightly hectic as we realized, much to our dismay, that the hostel we had booked for the night (the one that was less than a km away from where we needed to be in Huay Xia) was actually on the other side of the mighty Mekong River (back in Thailand).  When we arrived at this border town in Thailand, we had only two hours until the border closed and we were out of baht (the local currency).  Our van left us where we were and we were on our own at that point, trying to figure out what needed to be done to get us to the Gibbon Experience office to check in that evening, as was required.  We walked up to the main road, intent on finding and walking to the border crossing (which was only a few km away).  We asked several people which way the border crossing was and we were given a different answer each time (which, later, we found out was because the old border crossing had been in one direction, while the new one was in the opposite).  Finally we got some clarity and found a tuk-tuk driver who was willing to bring us to the Friendship Bridge between Laos and Thailand.  Since we had no more baht, we ended up exchanging money outside of the checkpoint and then paid for our ride, entrance, visa (and photo), and our bus ticket to actually take us across the border.  After a long wait (and a serious shortage of pens to write with), we finally got across!  We were ushered to a decadently decorated bus which took us the short five minutes across the river to Laos, where we proceeded to go through customs.  By the time we got through on the other side, it was nearly 5:30 and it was getting darker by the minute.  We hired another tuk-tuk driver to take us to the little town of Huay Xia (pronounced Way-sigh) and watched as the sun set over the river and the mountains.  It was a short trip, but breathtakingly beautiful!

(The ornate bus we rode on to cross the border) 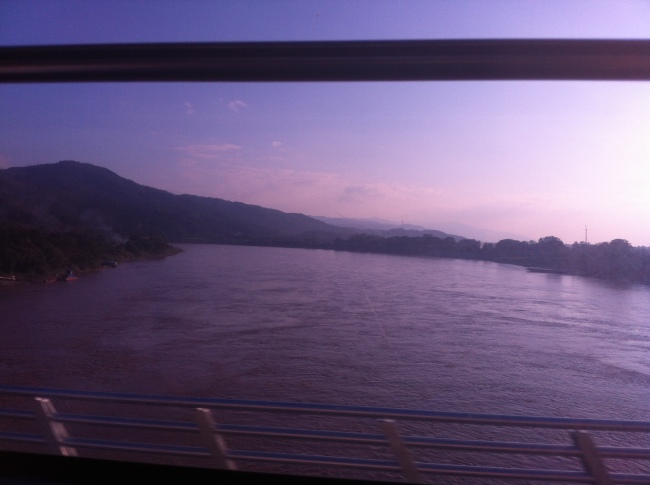 (the sunset over the Mekong)

When we finally arrived in the city, we set out to find the office for the “Gibbon Experience” of which the only directions we’d been given was that they were on the main road closest to the river.  Fortunately, the town is tiny and it wasn’t too hard to find.  We checked in with the staff there and met up with two girls we had just talked to at the border.  As it turned out, we would all be departing for the “Waterfall Experience” the next morning.  After saying farewell, we looked around for a hostel and then went to a nearby restaurant for dinner.  I had ordered a papaya salad, a Thai dish I’ve had before and much enjoyed, and vegetable soup.  Although the salad was spicier than anything I’ve ever tasted, Trent and I powered through it (in hindsight, I’m not sure why we ate it… it was SO SPICY!) and then finished the rest of our meal.  As we sat, we enjoyed watching the typical Laotian evening pass by;  fires were lit along the streets as families began to cook dinner, children played together and laughed outside, and people huddled together for warmth (it was awfully chilly).  We were lucky enough to be entertained by the same adorable little girl and her sisters who brought us our dinner.  She was doing bike “tricks” for us as we ate, and then when she was finished, she said to us, “now clap,” to which we gladly obliged.  When we had finished eating our food and drinking our Beerlaos, we headed back to our room, which had the most “awesome” ceiling fan (a mounted oscillating fan), exhausted by the day’s travels and with great anticipation for the Gibbon Experience that we would be embarking on the next day! 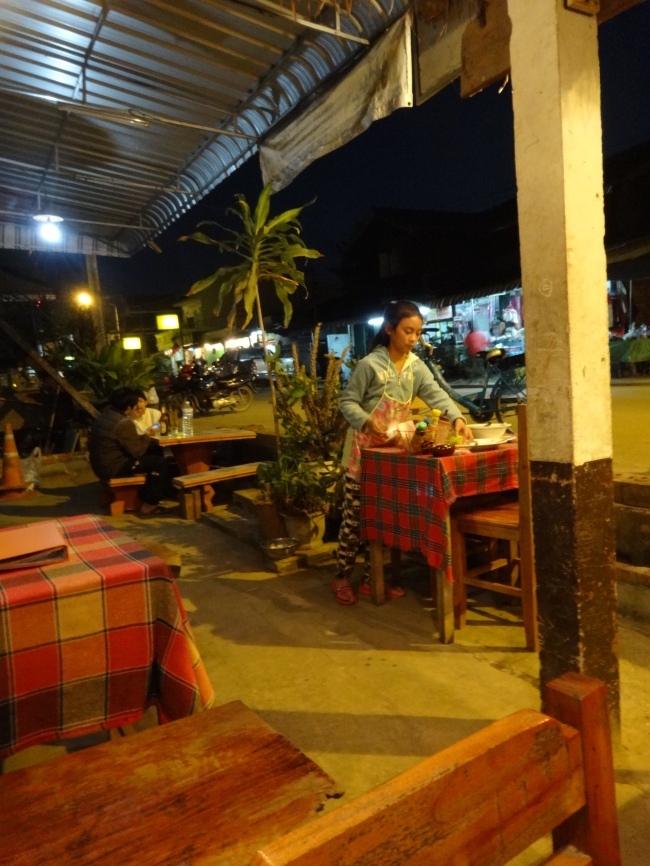 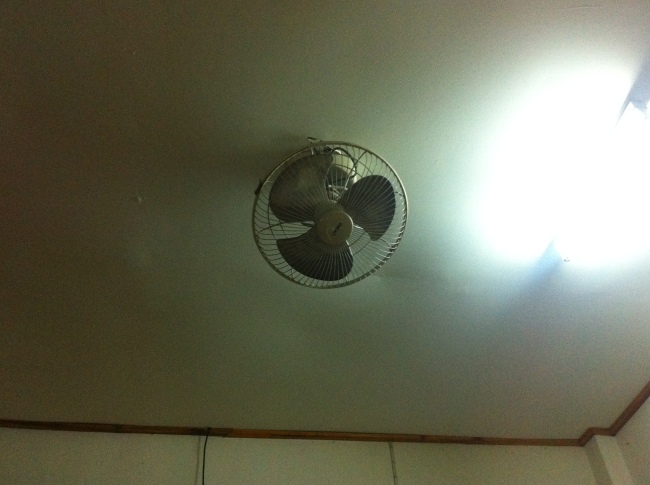 Posted by logsdonsbigadventures on February 5, 2014 in Uncategorized